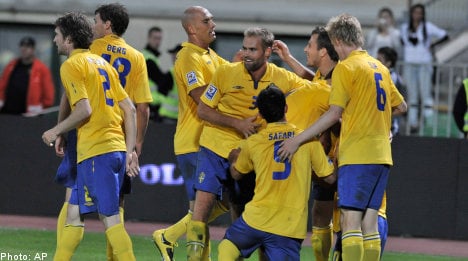 In the match’s 94th minute, a long feed from Sweden’s Rasmus Elm eluded a leaping Hungarian defender and landed at the foot of Ibrahimovic, setting up a one-on-one duel with Hungarian goalkeeper Gabor Babos.

The quick-footed Babos raced to the top of the penalty area to challenge the Swede, managing to get a foot on the ball in attempt to clear away the danger.

But the ball then bounced up and off the chest of the hard charging Ibrahimovic, whose momentum was enough to send the ball in the back of the net just seconds before the referee’s whistle signaled the end of the match.

The last-second goal, dubbed a “miracle” in the Swedish press, came as relief to Elm, who caused a penalty which allowed Hungary to equalize the match 1-1 in the 79th minute.

Defender Olof Mellberg gave Sweden an early lead with a nifty header of a corner kick in the 8th minute.

Sweden kept Hungary on the defensive for much of the match, accumulating a number of scoring chances, including a near miss by Ibrahimovic in the 49th minute.

The game-ending heroics by Ibrahimovic echoed a similar performance from 2005 in which the Swedish star also scored a stunning last-minute goal to hand Hungary a home loss in a World Cup qualifier.

“It may not have been the prettiest goal I’ve ever scored, but it was an important goal,” Ibrahimovic said of Saturday’s goal, according to the Dagens Nyheter (DN) newspaper.

A draw would have left Sweden with only 10 points and four points behind second place Hungary in World Cup qualifying group play.

But with Ibrahimovic’s goal and the consequent victory, Sweden now has 12 points overall, only one less than Hungary, leaving the Swede’s one step closer to a second place finish and a likely spot in the second round playoff.