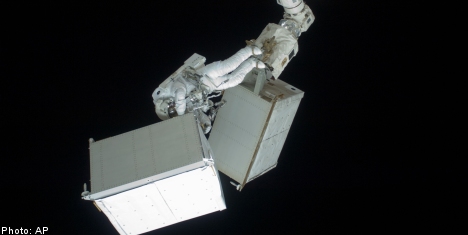 The two astronauts installed new equipment on the International Space Station, but failed to connect some of the cables.

NASA astronaut Danny Olivas and Fuglesang of the European Space Agency concluded the more than seven-hour walk at 11:40 pm (0340 GMT Sunday), the US National Aeronautics and Space Administration said.

According to the announcement, they completed their major objectives, but not all of them.

The spacewalkers deployed a new payload attachment system, replaced a failed rte gyro assembly, installed two GPS antennae and did some work to prepare for the installation of the Node 3 “Tranquility” module next year.

“During connection of one of two sets of avionics cables for Node 3, one of the connectors could not be mated,” NASA said in a statement.

“This cable and connector were wrapped in a protective sleeve and safed. All other cables were mated successfully.”

On Friday, Fuglesang and Olivas installed a liquid ammonia tank to keep the space station cool and completed several other tasks.

The spacewalkers also moved a spent ammonia tank, which was removed Wednesday, into the shuttle’s cargo bay to be taken back to Earth.

With this week’s outing Fuglesang — who was the first Swede in space in December 2006 — became the first astronaut from outside the United States or Russia to participate in more than three spacewalks.

The duo also fetched US and European equipment from the orbiting station’s Columbus laboratory that will be brought back to scientists on Earth.

Earlier, a large piece of space debris drifted toward the ISS, but NASA said it would not affect the mission’s spacewalks.

The shuttle brought 7.5 tonnes of supplies, including new station crew quarters, a freezer, two research racks and a treadmill named after US comedian Stephen Colbert, to the station.

The freezer will store samples of blood, urine and other materials that will eventually be brought back to Earth for study on the effects of zero-gravity.

The Combined Operational Load Bearing External Resistance Treadmill (COLBERT) is the ISS’s second treadmill. Exercise is key for astronauts spending long periods of time in space, where zero-gravity can result in muscle atrophy.

Colbert originally won an online poll for NASA to name a new space station room after him, but the US space agency decided to instead name the new module Tranquility and allow the satirist to have his name placed on the treadmill.

The mission for Discovery, currently orbiting with the ISS 354 kilometers above the Earth, is the fourth of five planned for the shuttle program this year. The last is scheduled for November.

The shuttle will remain docked at the ISS until Tuesday, and is due to return to Earth on September 10.

Once the mission is complete, just six more shuttle flights remain before NASA’s three shuttles are retired in September 2010.