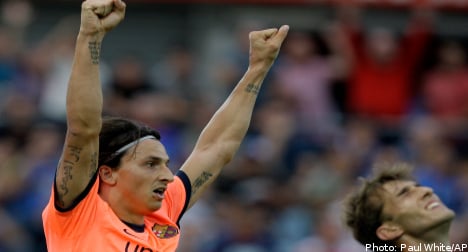 Barcelona’s record signing scored the opening goal on 65th minutes before substitute Lionel Messi grabbed a second to make it a perfect two wins for Barcelona and reinforce the Spanish champions at the top of the table on Saturday.

The goals are a real boost for Ibrahimovic as he bids to justify his 69 million euro ($100 million) transfer fee and the Swede can now look forward to facing old club Inter Milan in Wednesday’s Champions League match at the San Siro.

Barca took nine games to reach the summit last season before staying there for the remainder of the campaign and coach Pep Guardiola will hope that is a good omen.

Guardiola paid tribute to the returning Messi and Andres Iniesta, back from injury after three months out, who came on as second-half substitutes to change the game.

“We can’t deny that they (Iniesta and Messi) are too very good players,” said the Barca coach. “They are good at disrupting teams, running at players and creating things.”

“It was a perfect debut,” praised Guardiola. “I thought we had made a great signing before and after seeing him I think he is going to give a lot to this club for years to come.”

Hosts Getafe had the better early chances against the treble winners and were unfortunate not to take a lead hitting the woodwork twice in the first half an hour.

Juan Albin’s fierce shot hit the crossbar on 11 minutes and then Roberto Soldado rattled the post.

The warnings appeared to spur Barcelona into action and Ibrahimovic should have scored in the 43rd minute but his tame effort was foiled by Oscar Ustari.

Guardiola waited just 12 minutes into the second before making a change with Messi and Iniesta coming on.

Ibrahimovic provided the breakthrough when he converted an Eric Abidal cross before a trademark counter-attack ended with Messi slotting home on 78 minutes.

Elsewhere Real Madrid kept pace with their Catalan rivals at the top of the Spanish league table with Brazilian playmaker Kaka pulling the strings in a 3-0 win at Espanyol on Saturday.

Kaka has yet to open his Real account since joining from AC Milan, but showed a touch of class to set up Esteban Granero for his first Real goal and create the second for stand-in captain Guti.

Substitute Cristiano Ronaldo, the world’s most expensive player, added a third in the final minute for his second goal in as many games.

“I don’t think he (Ronaldo) has this enormous weight on his shoulders (due to the transfer fee),” said Real coach Manuel Pellegrini.

“He scored against Deportivo (La Coruna) and again today. He is adapting to a new league and sometimes people just scrutinise him too much.”

It was Espanyol’s first competitive game at their new Cornella-El Prat stadium and Real had some worrying moments before their class shone through to make it a maximum six points.

Granero struck the 40th minute opener after a clever wall pass with Kaka.

Kaka then turned the defence inside out and provided a pinpoint pass for Guti to ram home on 77 minutes before Ronaldo netted in the closing stages.

Atletico Madrid are still searching for their first win of the season after a disappointing 1-1 home draw against 10-man Racing Santander.

“If we drop our heads now and start to lose our nerves it will be difficult to go up the table,” said Atletico coach Abel Resino.

As planned Atletico fans staged protests at the club’s lack of transfer activity creating a sombre mood at the Vicente Calderon.

The jeers turned to cheers in the 43rd minute when Jose Jurado struck home a left-footed effort to put Atletico ahead.

However, Racing equalised in first half stoppage-time through Oscar Serrano to abruptly halt the celebrations.

Racing had defender Jose Crespo sent off for a crude challenge on Simao two minutes after the interval but Atletico, beaten 3-0 in their season opener against Malaga, could not capitalise.

Later on Saturday Real Madrid travel to Espanyol in what will be the first competitive game at Espanyol’s new Cornella-El Prat stadium.

It will be a special occasion for Real Madrid goalkeeper Iker Casillas who celebrates a decade between the posts after making his debut for Real on September 12th 1999 at Athletic Bilbao.

“It has been a wonderful decade,” said Casillas. “We’ve had bad moments too, but the good ones outweigh the others by far.”

Sevilla host promoted Real Zaragoza in Saturday’s late match as they try to register their first points of the season following an opening day loss at Valencia.