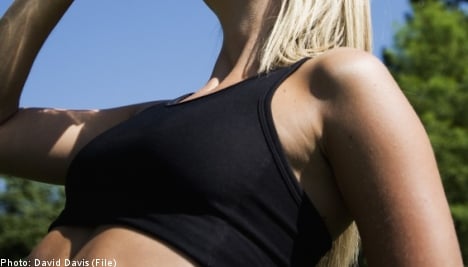 The lack of combat-ready underwear for Sweden’s women in uniform has been a continuing sore point for the Swedish Conscription Council (Värnpliktstrådet).

“Our opinion is that the Swedish Armed Forces should have ordered good, flame-proof underwear,” Council spokesperson Paulina Rehbinder told The Local.

“There should be suitable apparel for women.”

The poor quality of the standard-issue sports bras prompted a group by female soldiers at the LV 6 military base in Halmstad to voice their displeasure to representatives from the Council recently.

The women complained that the bras’ fasteners have a tendency to come undone when the women performed rigorous exercise, forcing the female soldiers to take off all of their equipment in order to refasten the brassieres.

In addition, the bras aren’t flame resistant and, once lit, can melt onto conscripts’ skin, the Göteborgs-Posten (GP) newspaper reports.

The Council’s Rehbinder accuses Sweden’s military establishment of dragging its feet on the issue.

“It has not been a priority for the higher ups because women make up only around five percent of the Swedish armed forces,” Rebinder said, adding that the problem of suitable clothing for Sweden’s female soldiers has existed for more than two decades.

But she hopes a fresh batch of Swedish military recruits may help press the issue with the Armed Forces’ top brass.

“Earlier this year the National Service Administration (Pliktverket) informed them that around 2,000 female recruits were due to enter the service next year. That got them moving,” she said.