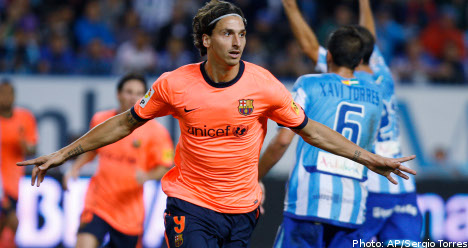 Ibrahimovic showed once again that he is the form of his life when he latched on to a sublime pass from Argentinian superstar Lionel Messi to poke the ball passed the Malaga goalkeeper to register Barcelona’s opening goal on 39 minutes.

After twisting his ankle in the previous match, Ibrahimovic was long thought to be a doubt for the game, away in the southern Spanish holiday resort city.

He was not included in the starting eleven but came on already after 29 minutes after Frenchman Thierry Henry felt discomfort in his groin.

Barcelona continued their dominant start to the season running out 2-0 winners after former Manchester United defender Gerard Piquest put the game to bed with a 58th minute headed goal after a free kick by Xavi.

Ibrahimovic has now surpassed Diego Maradona’s suit of four goals in four opening matches, and as Christiano Ronaldo was unable to score in Real Madrid’s clash with Teneriffa, holds the record on his own.

The night ended on a slightly sour note for the Swedish star as he picked up a warning in the 70th minute but the evening belonged to him and his Barcelona team mates.