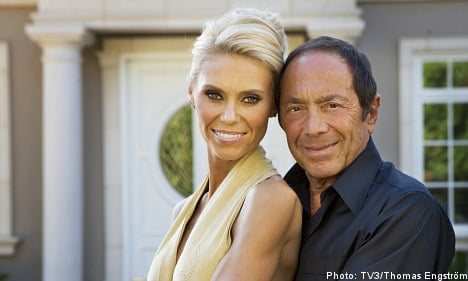 The glitterati and literati got all wee-wee’d up this autumn over a Swedish Hollywood Housewife with an irresistible name. Anna Anka caused a hullabaloo by suggesting that being a housewife might be a worthy goal for Swedish women.

The gasps of horror echoed from the corridors of think tanks to the editorial offices of daily papers. “She praises Islamist ideals,” lamented the Social Democratic Women’s Federation. But she had her fans, too. One pundit wrote that the best formula for a happy marriage is a working husband with a genuine housewife

When I first arrived in Stockholm and had not yet found work, Swedish women would ask me if I intended to be a “lyxhustru” (luxury housewife). The hostility in their tone was easy to detect.

“They’re just jealous,” sniffed Ms. Anka, at the reaction she provoked by extolling the virtues of being a trophy wife rather than a feminist soldier in the workforce.

As for Swedish men, Anna advised them to stop whining about their feelings and whip out their wallets: they “do not hesitate to insult a woman by allowing her to search for money while he is calculating his part of the bill. American men know how to woo a woman. They are very romantic and buy expensive gifts.”.

At times, Anna sounds straight out of a mid-last-century primer for would-be femmes fatales. Helen Gurley Brown, who made Cosmopolitan magazine a phenomenal success, advised in “Sex and the Single Girl” that men should pay for their pleasures with presents and women should—not to put too fine a point on it—know how to “use” them.

Long disparaged by feminists, Brown is now considered a pioneer of the women’s movement. A new biography ”Bad Girls Go Everywhere,” by a professor of gender and women’s studies, praises her as a pivotal pre-feminist icon.

So is Anna Anka a blast from the past? Or the harbinger of a revisionist trend. Has she tapped into an unexpressed disenchantment with what she calls “all that equality nonsense?”

There are indications that women are suffering buyers’ remorse for believing the Alva Myrdals and Simone de Beauvoirs who promised freedom from domestic prison and self-actualization in the workplace. A male boss with delusions of competence is more oppressive than a chauvinistic husband.

Fallen sisters have already started an opt-out revolution. An astonishing number of American women with advanced degrees have elected to drop their careers to stay home, bake cookies, join book clubs and let hubbie bring home the bacon. They do not see “Honey, did you pick up my dry cleaning” as the equivalent of domestic abuse.

Careers did not make these women as happy as they expected. They discovered the working world is what men have always considered it to be: a necessary routine, a duty, an unfulfilling bore. Swedish men who figured this out quite enjoy slacking on paternity leave—preferably during the summer months or the world cup in soccer.

At times it seems there is a mass media conspiracy to put the bitch back in the kitch, complete with frilly apron. The hit TV series Mad Men, set in the early 1960s, is an elegant study in traditional sex roles. Advertising executive Don Draper goes to his Madison Avenue office, where he competes, makes deals, back stabs and gets his back stabbed in return. Only frequent nips from the whisky bottle on the desk and a pitcher of martinis or two at lunch get the chain-smoking ad men through the day.

Mad men might burn out emotionally, but since this was long before the Oprah tell-everything confessional need to share anxieties and doubts, Dan Draper does not spill his feelings all over the dinner table. His manly manjaw is firm at all times.

His wife rules their house in the suburbs, plays tennis, rides, has coffee with the other wives. On the surface compliant and submissive, she treats her husband like an ATM machine and has a fling or two on the side.

What do women want?

The “cleavage feminism” of Anna?

Or the grim feminism of Alva.

I know what I don’t want: either/or

I want to choose my choice.