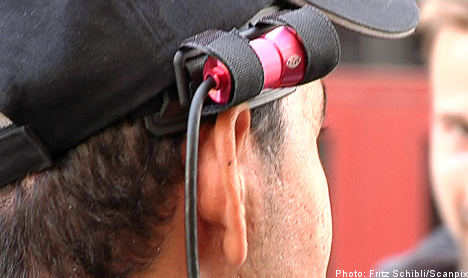 Starting this Wednesday, a number of meter maids from municipal firm Parkering Malmö will begin wearing the cap-borne cameras, which can register sound and video and are activated when an inspector pushes a button.

The resultant video clips will be saved, and may be used as evidence for incidents that are reported to the police or go to trial. All other clips will be erased.

“By virtue of the fact that we can record occurrences on video, we expect a reduction in the number of incidents in which parking attendants are exposed to verbal abuse and threats of violence,” said Leo Strömberg, head of department at Parkering Malmö, in a statement.

Parkering Malmö is the first company of its kind in Sweden to experiment with video technology, a method it claims has worked well in the United Kingdom.

“The number of incidents almost halved when they started wearing cameras,” said Parkering Malmö of the UK tests.

The city of Salford in Greater Manchester in north-west England was first to trial traffic warden headcams in the UK.

The country’s National Car Parks Services (NCP) said that assaults had dropped 30 percent in the city as a direct result of the mini CCTY cams, which resulted in a first conviction in March last year (see clip).