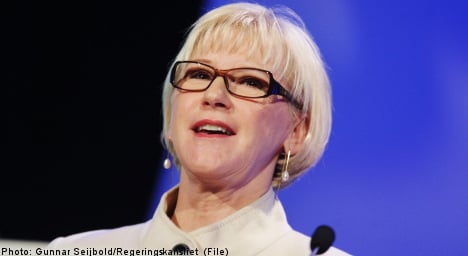 “I think it should be a woman,” Wallström said at a press conference in Luxembourg on Monday in response to a question about who might be appropriate for the as-yet-to-be-created position.

As the commissioner for institutional issues within the EU, Wallström’s portfolio includes the Lisbon Treaty which, once signed by the Czech president Vaclav Klaus, will create the post of EU president.

“From a democratic point of view it reduces that 52.6 percent of women to a minority…and I don’t think this is acceptable in the European Union of 2009. I think we have competent, good women that could be mentioned and nominated.”

Former Irish president Mary Robinson ruled herself out of the running at the weekend, citing her interest in pursuing the fight against global warming.

Lithuania, however, suggested it could nominate the female ex-Latvian president Vaira Vike-Freiberga.

Wallström’s current term as European Commissioner for Institutional Relations and Communication Strategy comes to an end on February 1st, 2010 and her future plans remain uncertain.

According to the Svenska Dagbladet (SvD) newspaper, Wallström is in negotiations with the United Nations over a possible high ranking position related to women’s rights.

In addition, Wallström’s Social Democratic colleagues back in Sweden are hoping that the popular politician will return home to help the party’s efforts to reclaim power in the 2010 Riksdag elections.