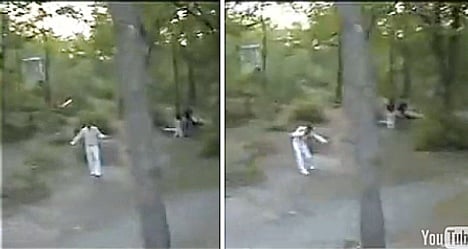 For three years, Sweden has been in the dark as to the identity of a frisbee thrower in Västerås in central Sweden who unwittingly sparked an online phenomenon.

A video clip of the incident, Vem var det som kasta? (‘Who threw it?’) has been viewed almost one and a half million times on YouTube.

Behind the camera that fine summer’s day at the Västerås frisbee golf course was one Micke Åhlin, Aftonbladet reports.

It was he who captured the cry of “fore” just after the wayward red frisbee makes contact with the face of a dapper young gentleman emerging from the woods in a white shirt and trousers.

Infuriated by the dark spectre of a stained shirt, the woodland wanderer immediately puffs out his chest, assumes an aggressive pose and ambles toward the cameraman uttering the words: “Who threw it?”

The viewer is left in little doubt that the frisbee thrower, should his identity be revealed, could be in for a bit of trouble. This is quickly confirmed by the white-clad walker: “Whoever threw it is in for a beating.”

Perhaps prudently, Micke Åhlin made a split second decision to protect the identity of the thrower. But now, three years on, he’s ready to spill the beans.

“It was Jörgen,” he told Aftonbladet.

The newspaper managed to track down Jörgen Leisdal to a town in Texas, USA. He remembered vividly the moments leading up to the point when frisbee met face.

“Just as I was throwing it I saw this guy coming out of the woods and thought to myself, ‘oh no, this isn’t good’ because there were around ten guys with him.”

But Leisdal was reassured that he could now return to Sweden without fear of reprisals. Though he did not wish to be interviewed, the victim of the accidental plastic disc attack said he had cooled down and did not bear a grudge.