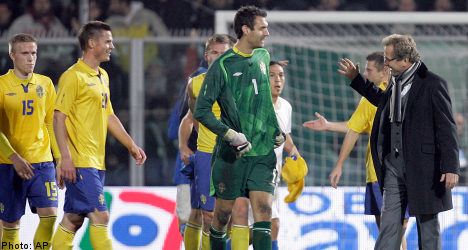 “Overall we performed well and showed courage and charisma. It was exciting and enjoyable to be a part of it.”

The Swedes fell to a goal by Italian centre back Giorgio Chiellini in an international friendly which gave a number of Italy’s second-string players a chance to perform in front of a home crowd.

The world champions struggled to impose themselves on their well-organized opponents, who were missing their star player Zlatan Ibrahimovic.

But if Sweden had something to prove having missed out on World Cup qualification, they did little in this match to suggest they might soon bounce back to past glories from the 1990s.

True to his word, Italy coach Marcello Lippi rang the changes from the near full-strength side that drew 0-0 with the Netherlands on Saturday.

The result was an almost unrecognizable Italy with only Juventus centre-back Chiellini a regular first-team fixture.

“It was a satisfactory game, the lads didn’t think about the changes, they played with commitment and enthusiasm,” said Lippi.

“I saw them play with the same spirit there always is, now we have to finalize this group.

“We’ll wait for the (World Cup) draw in December and then we’ll see against whom we have to measure ourselves.”

But with the other players eager to impress their coach to try to book a ticket to South Africa next year, and with Sweden’s players hoping to make their mark on new boss Hamrén, it promised an entertaining game.

And there was but a short wait for the action to begin as Tobias Hysén beat the Italian offside trap on three minutes only to be denied by Cagliari goalkeeper Federico Marchetti, who made a reaction one-handed save from the Swede’s hurried effort.

Isaksson was there again on 20 minutes to parry Di Natale’s shot before Cagliari midfielder Davide Biondini blasted the follow-up wide.

Italy had the lead on 28 minutes when Sampdoria’s Giampaolo Pazzini got above his marker to head on Marco Marchionni’s corner and Chiellini arrived unmarked at the back post to score with a diving header– his second goal for Italy.

The second half saw a raft of substitutions which disrupted the flow of play and ensured that chances were hard to come by.

Villarreal striker Giuseppe Rossi created a yard of space behind the Swedish backline but sent his chip high and wide.

Sweden goalkeeper Isaksson came closest to snatching an equalizer with the last touch of the game when he came up for a corner in a last desperate throw of the dice but his header was off target.