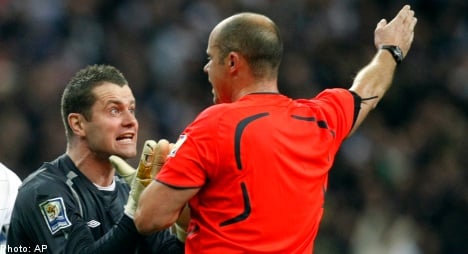 The disputed goal came when French defender William Gallas scored from close range in the eighth minute of the first period of extra-time to level the scoring. The goal stemmed from a pass by Henry, who had blatantly handled the ball a fraction of a second earlier to the right of Shay Given’s goal as the Irish fought to clear the ball.

Despite vehement protests from Irish players, the Swedish referee decided to allow the goal, which tied the match 1-1, but put France through to South Africa on aggregate following a 1-0 victory in Dublin last Saturday.

Swedish tabloid Expressen’s Johan Orrenius was somewhat more charitable of Hansson’s blunder, pointing out that his officiating was “excellent” for the match’s first 102 minutes.

Nevertheless, Orrenius believed the mistake was unforgivable, especially for the Irish.

“Hansson ought to avoid travelling to Ireland ever again,” reads the headline of his Thursday column.

Orrenius goes on to lament Hansson’s role in helping France qualify for the World Cup.

“Somehow I feel like I want to have France in a World Cup, but it’s too bad that some of the world’s most gifted players couldn’t get it done without the help of a Swedish referee.”

“I asked Thierry Henry after the game and he said ‘I handled it but I didn’t mean it’,” Brady said.

“When you look at the film I think he kept the ball in play and he meant it. I wouldn’t go down the road of (calling it) cheating, the players seek every advantage they can.

“But I would ask FIFA, ‘Do we want to play the match again?’ We would go to Paris and play again. I don’t think it would come to that but we would be willing to go to Paris, on their home ground, and have a fair winner.”

“The blatantly incorrect decision by the referee to award the goal has damaged the integrity of the sport,” the FAI said in a statement.

“We now call on FIFA, as the world governing body for our sport, to organize for this match to be replayed.”

Ireland coach Giovanni Trapattoni told a press conference minutes before the statement was released by his employers that he did not believe FIFA would grant a replay.

“It is impossible to repeat the game,” the experienced Italian said.

He urged FIFA to explain how Swedish referee, who failed to spot the incident, had been chosen for such a high-profile match, saying: “For this important game we needed a stronger referee, an important referee.”

Trapattoni also called for extra-time to be scrapped at the end of the two-leg World Cup playoffs, with the second match instead going straight to a penalty shootout in the event of a draw in regulation time.

Hansson, who works as a firefighter, failed to spot the Henry handball. The player himself admitted handling, but said the responsibility for seeing the incident fell to the match official.

Trapattoni refused to blame the player, saying: “It wasn’t up to Henry to

Angry Ireland fans and newspapers nevertheless blasted Henry as “Le Cheat” Thursday as the traditional luck of the Irish deserted their heartbroken team.

“We were robbed” said the Irish Star, “Le Cheat” added the Irish Mirror, while the Irish Sun splashed with “Henry, You Bastille” and the “Hand of the Frog” — a play on Diego Maradona’s 1986 “Hand of God” goal over England.

A Facebook page entitled “We Irish hate Thierry Henry (the cheat)” also drew hundreds of comments — some of them unprintable — including a call for an Irish boycott on French goods.

“I would say croissant sales will slump today,” said one contributor to the social networking site page.

“He touched it the first time to stop the ball going out of play and the second time he adjusted the ball so he could knock it across for the goal.”

But O’Leary, who played for Ireland in the 1990 World Cup, refused to blame the referee, saying he had had an otherwise “excellent” game in Paris Wednesday night, but on the Henry incident, he had made “a scandalous decision”.

“Thierry Henry is a lovely lad and he likes to be liked and he’ll be in a very embarrassing position now because he wants to play the game in a certain way,” he told BBC radio.

Irish Prime Minister Brian Cowen issued a statement congratulating the national team on its “courageous performance,” but made no mention of the handball controversy.

He said the team’s efforts kept the nation enthralled for 120 minutes and they made a “heroic effort” to qualify.

But the Irish Times described the incident as “Heartbreak of Henry’s hand of God, part II,” saying Ireland’s travelling army of fans “fell to the ground, inconsolable.”

The Irish Independent said the team was “cheated” out of the World Cup finals.

“Armed robbery” its headline says, describing it as a “Massive injustice for boys in green as referee’s howler sends French to South Africa”.

“The end had a larcenous feel,” says its soccer columnist Vincent Hogan, “a French captain, literally with guilt on his hands. ‘La Marseillaise’ being sung by empty voices.”

In an editorial the Examiner says the “travesty” demonstrated again the need to use video technology for disputed incidents in matches.

The obvious miss by Hansson isn’t the first time a Swedish referee has been embroiled in controversy at the international level.

Back in 1990, Sweden’s Erik Fredriksson allowed Argentine legend Diego Maradona to defect a ball away from his own goal with his hand in a World Cup match against the Soviet Union. Argentina went on to win 2-0.

And in the 1994 World Cup, Bo Karlsson, who is now chair of Sweden’s football referees’ association, handed a yellow card to the wrong Nigerian player in a group match against Argentina.

More recently, Swede Peter Fröjdfeldt was criticized for missing an obvious push by Germany’s Michael Ballack, allowing him to head in a goal against Portugal at the Euro 2008 championships.

And one Swedish referee, Anders Frisk, was forced into retirement after receiving death threats following his decision to send off Chelsea’s Didier Drogba during a 2005 Champions League match against Barcelona.