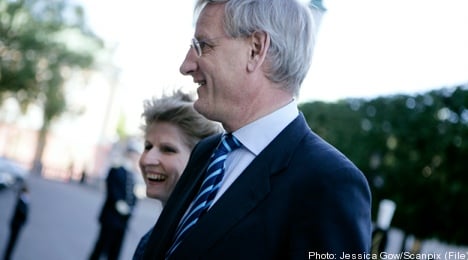 According to newspaper Aftonbladet, the Bildts have not paid employer contribution fees or preliminary tax for the 47-year-old woman whose salary for the tax year 2008 amounted to around 8,000 kronor ($1,152) per month.

Since being employed by the couple, the nanny has not declared her income to Swedish authorities either.

When details of the situation emerged last year, Carl Bildt claimed that payments for the nanny’s services had been made in Italy and were in order.

Further to the allegations, the Swedish tax authority (Skatteverket) decided to investigate the case.

Since the woman is registered at the same address as the couple they concluded that she is obliged to pay taxes in Sweden.

For the 2007 tax year the nanny was liable for taxes amounting to 100,000 kronor ($14,410) in addition to employer contribution payments the Bildt’s should have paid.

“It is a complicated situation,” Corazza Bildt told Aftonbladet. “But if we have made a mistake we will, of course, pay and make it right.”

Cecilia Johnson Tidu, Skatteverket’s handling office in the case, says all responsibility lies with the Bildts.

“The employer has responsibility to report income statements to Skatteverket, pay preliminary tax as well as national insurance fees for their employee.”