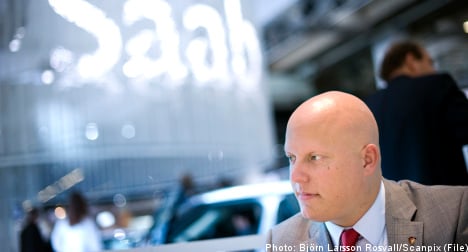 “We regret that, after six months of intensive and goal-oriented work, we have come to the painful and difficult conclusion that we are not going to be able to carry out the acquisition of Saab Automobile,” said company chief Christian von Koenigsegg in a statement.

The collapse leaves thousands of jobs in western Sweden at risk – as well as the 4,000 people employed at the plant, many thousands of people work at Saab’s suppliers. Tens of thousands around the world are employed in Saab dealerships.

Speaking to Swedish news agency TT, von Koenigsegg added that the deal had collapsed because it had taken too long to reach agreement:

“The way things look right now, we cannot complete the deal. The timeframe is unpredictable, there are too many processes that need to fall into place in parallel. Time has dragged on and not everyone has kept up.

“We have a business plan, but when Saab is bleeding and can’t develop during this period of waiting the financial implications and the results of the of the business plan are very unpredictable.

“We had set an absolutely final deadline of 30th November and we saw today that there was no hope of getting a deal together by then. And after that we dare not believe in the plan. Too much time has passed.”

Koenigsegg announced in September that it had teamed up with Beijing Automotive Industry Holding Co Ltd (BAIC) to buy Saab from GM.

But it still needed a a €400 million ($600 million) loan from the European Investment Bank and wanted the Swedish government to act as a guarantor.

Swedish media have recently suggested that Saab was short of money to continue its day-to-day operations, and doubts have flourished among experts and commentators about whether Koenigsegg would have the necessary expertise to run a major car company.

US businessman Mark Bishop, who was a shareholder when Koenigsegg Group was founded in June, is understood to have since sold his share in the company.

The Swedish government had as of Tuesday still not decided whether to act as guarantor.

General Motors said on Tuesday it was “disappointed” that Koenigsegg Group had terminated a deal to buy its Saab brand.

“We’re obviously very disappointed with the decision to pull out of the Saab purchase,” GM President and CEO Fritz Henderson said in a statement.

“Many have worked tirelessly over the past several months to create a sustainable plan for the future of Saab by selling the brand and its manufacturing interests to Koenigsegg Group AB,” Henderson said.

“Given the sudden change in direction, we will take the next several days to assess the situation and will advise on the next steps next week.”

GM said the proposed sale of its Swedish mark was “terminated at the discretion of the buyer.”

Unions at Saab’s plant in Trollhättan were surprised by the collapse of the agreement:

“This was very unexpected. I thought they’d come a long way in discussions with Koenigsegg and basically thought that the whole deal was completely sealed,” said Håkan Danielsson, chairman of the local branch of Akademikerna, which represents white-collar workers at the factory.

The head of the influential IF Metall union at Saab, Paul Åkerlund, was dismayed by the news.

While some 3,400 people are employed at Saab’s factory in Trollhättan, a town of 55,000 in southwestern Sweden, another 12,000 work for suppliers or subcontractors that directly rely on the automaker for their income.

David Cole, chairman of the Center for Automotive Research in the US state of Michigan, said Tuesday’s announcement was “not that big a deal” for GM, suggesting it may find another buyer for Saab given how many cash-rich Chinese companies are jockeying for a position in the global auto industry.

A Chinese carmaker, Geely, is currently trying to buy Sweden’s other carmaker, Volvo Cars, from its US parent company Ford.

Purchasing a relatively “cheap” European carmaker like Saab would provide both a foothold in key markets and the technology needed to compete, Cole said.

GM could also decide to hold on to Saab, as it did with German carmaker Opel, to further strengthen its European position, or shut it down, a view shared by a number of Swedish car industry analysts.