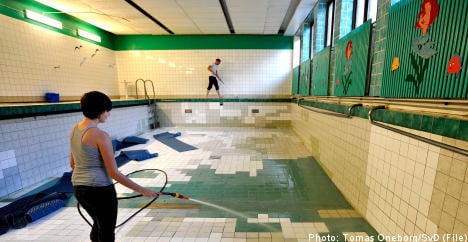 The pool at Aspuddsbadet gets a cleaning in late September 2009

The three squatters are members of a protest group made up of residents from the Stockholm suburb of Aspudden who have been attempting to stop the planned demolition of the Aspuddsbadet public pool.

Since early September, at least five members of Rädda Aspuddsbadet (‘Save Aspuddsbadet’) have occupied and kept watch over the facility in hopes of delaying the planned demolition.

But after two months of waiting, the group’s act of civil disobedience came to an end.

“We have taken out three people who are set to be questioned and emptied the facility. There is a decision from prosecutors that the building should be handed back to its legal owners, the city’s culture and sports division,” police spokesperson Karin Solberg told the TT news agency.

According to her, the raid took place without incident.

But Ola Schubert, a spokesperson for Rädda Aspuddsbadet, was upset following the police action.

“I’m speechless. We’ve tried to have a discussion with the politicians for two years and no one has made an effort to contact us. We’ve had a dialogue with police since day one, and no one said that that dialogue had broken down,” he told TT.

The 90-year-old Aspuddsbadet has been in need of a facelift since the mid-1980s. It was closed in February when the contract between the city of Stockholm and the association which operates the pool expired.

Rather than pay for comprehensive renovations, however, the city decided the building should be demolished to make way for a new preschool, prompting a backlash from local residents.

Around 8am on Wednesday morning, close to 100 metres of the street outside Aspuddsbadet was blocked off.

The area was being guarded by ten officers, while members of the protest group gathered nearby.

“They came at 6am. I got a phone call saying the police were here. Since then we’ve tried to get as many here as possible,” said Schubert.

According to him, the police first climbed up on the roof to enter the building and reach the three activists who had been staying in the facility overnight.

The three activists were then taken away in a police car on suspicions of trespassing.

While the morning’s raid appeared to go smoothly, Schubert is nonetheless disappointed over the turn of events.

“I think we’ve done everything to get a dialogue going with politicians but haven’t succeeded. We’re terribly upset this morning,” he told TT.

As late as last weekend, the group had arranged an event to raise awareness for their cause which attracted hundreds of people to the indoor pool.

“It’s important to have facilities which can serve as gathering places, so that we don’t just end up being a dormitory town,” said Iva Troj, one of the people engaged in attempting to save Aspuddsbadet.

According to Inger Båvner, head of Stockholm’s culture and sports division, the protesters were removed for safety reasons.

“We were forced to secure the building. The fire department had been there for an inspection of the pool and found that it wasn’t safe to be in. As a result, we had to take responsibility as the building owner,” he told the Dagens Nyheter (DN) newspaper.