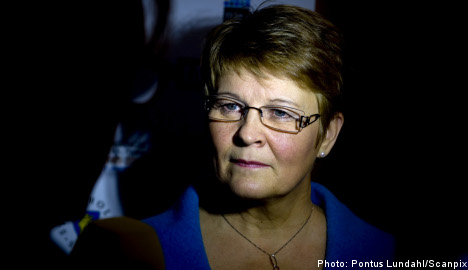 Jan Åke Jonsson has criticized the government after the collapse of a deal between US General Motors and Koenigsegg.

“It is Saab owner General Motors that should find a new buyer, not the government,” Maud Olofsson responded in an interview with the TT news agency.

When questioned what the government was doing now as time runs out for the beleaguered Trollhättan car marker, Olofsson said:

“Now it is in the hands of GM and it is they who should find a new buyer. It feels positive that GM has not given up hope of finding a new buyer,” she told TT.

When asked if the government had had any contact with potential buyers, Olofsson once again underlined that it is GM that is selling the firm, and not the government.

“But we are in contact with GM and try to keep informed. If they find a new buyer it will no doubt be time for a new EIB loan and loan guarantees,” she said.

Olofsson rejected accusations by Jonsson that the government had been slow in responding to loan guarantee requests.

“That is not my view, and Koenigsegg say themselves that it was not that that was the problem but that it had been an incredibly complex process.”

Olofsson explained that the loans had to be secured from the European Investment Bank (EIB) first, before state guarantees could be provided.

“Despite this we speeded up the procedure at the National Debt Office to ensure that there would be no delay. We have pressured the EIB to take a quick decision, and the EU Commission to speed up their procedure,” Olofsson said.

“There are several elements that are proceeding simultaneously, but Koenigsegg has not had a single complaint about the government’s actions,” Olofsson said.

Olofsson confirmed that the government is in contact with GM over the prospect of Saab’s possible closure and emphasized that the American company holds a responsibility for the firm and its workers.

“But it is also the case that we have to find alternative strategies and that work has already begun, together with the region and companies over there,” Olofsson said.

“There is extensive expertise within this cluster and if we are not going to be able to continue to manufacture vehicles in the numbers that we do today, what can we produce instead?”

“How can we apply this knowledge? We need parallel strategies at the moment to help us to emerge from this crisis,” Olofsson added, arguing that the political opposition had been guilty of indulging in populism over the duration of the Saab process.

“What I am concerned about regarding the opposition is their judgement with regard to the management of taxpayer funds. Had we listened to them then we would have deposited seven/eight billion kronor in GM’s pockets and secured not a single job in Sweden.”