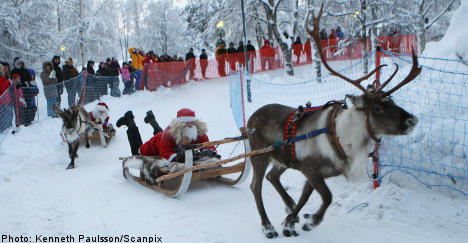 Jim Chan of Hong Kong emerged at the top of a field of nine participants from around the globe who braved 20 below zero Celsius temperatures to compete in the sixth installment of what is considered the unofficial Santa Claus world championships.

The red-suited competitors, who came from as far afield as Burundi, South Africa, and Australia, went head to head with one another in a series of events including chimney climbing, porridge eating, present wrapping, and reindeer racing, held as a part of Gällivare’s Snöyran winter festival.

While the contestant from Burundi used antelopes to train for the reindeer event, defending Santa of the Year (Årets tomte) David Dawney of Australia, winner of the 2007 Santa Games, did his best to prepare using one of his home country’s most famous animals.

“It’s a bit bumpy with kangaroos,” Dawney told Sveriges Television (SVT) following what he considered a disappointing finish in the reindeer competition.

Nevertheless, one local expert reckons that the contestants’ training methods – however unorthodox – are paying off.

“The Santas get better and better at driving every year,” said reindeer handler Andreas Olofsson to the local Norrbottens-Kuriren newspaper.

For Taryn Smuts, a competitor from South Africa, the Santa Games marked the first time she’d ever seen snow. And while she marveled at the whiteness of the northern Swedish landscape, the freezing temperatures that came with it were almost too much for her to bear.

Event arranger Elisabeth Landby told The Local that there are no set criteria for how the field of Santa contestants is picked.

However, the bylaws are quite clear when it comes to what’s expected of the Santa Games contestants on the day of the event.

Not only does a competing Santa need to “nice to everyone, especially children”, he or she also needs to be “clean and looking their Santa best” and “completely sober”.

“Santa can preferably have a big beard, but not a silly mask,” according to the rules of the contest.

The new Santa of the Year, Hong Kong native Chan, ended up in Gällivare after winning a contest arranged in China by officials from the Swedish town back in 2007.

While he doesn’t speak Swedish or English, Chan was able to proclaim “Merry Christmas!” on SVT in his native Cantonese.

According to Landby, the Santa Games drew “several hundred” spectators, despite the chilly temperatures.