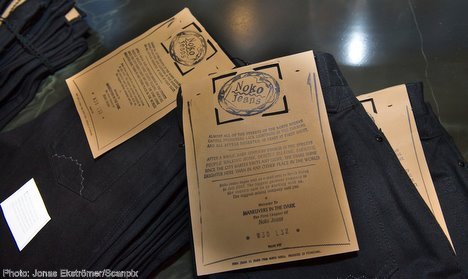 Jakob Ohlsson, a representative of Noko Jeans, the Swedish company behind the designer denim brand, said at first he thought it was a joke, but then realized all of their products had been removed from the store.

“Apparently PUB has censored our exhibition/store by shutting it down and ‘confiscating’ the jeans because of the ‘working conditions in North Korea’,” Ohlsson told AFP news agency in an email.

Ohlsson, along with Jacob Aastroem and Tor Rauden Kaellstigen – all under the age of 25 and with no previous experience in business or fashion – started Noko Jeans in mid-2007, prompted by a desire to enter in contact with isolationist North Korea.

Their designer jeans were to be sold starting Saturday at Aplace, a boutique that is a tenant of the trendy PUB department store in central Stockholm.

“A half-hour before opening, we got a call from the head of the department store and he explained to me… that PUB cannot sell the Noko Jeans,” Kalle Tollmar, the founder and CEO of Aplace told AFP.

“The explanation I got was that (the store’s management) had taken the decision… that PUB is not the right place, or platform, for this kind of political discussion,” he said, confirming his store was hoping to continue distribution of the controversial designer duds at another location.

Noko Jeans said it wanted to have a positive influence on North Korea, often criticised for its poor human rights record, by producing jeans there.

North Korea “has been isolated for so long and ethically, we thought that any sort of increased contact with the outside world would be good,” Ohlsson told AFP.

“I sincerely hope (PUB) will remove everything labelled ‘made in China’ as well,” he said on Saturday.

The Swedish entrepreneurs, who have visited North Korea twice, claim the working conditions at their Pyongyang-area factory are better than those of a previously visited Chinese plant.

“When we arrived in North Korea in 2008, we expected worse (than in previously visited China) but were rather happily surprised to see a clean factory, lots of space,” Noko Jeans said, adding it stayed in North Korea for 10 days to monitor the application of a business code of conduct based on European standards.