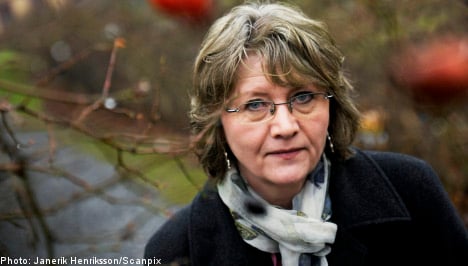 “She received an offer and she said ‘no thanks’. I can’t make a judgment about why she refused,” Joakim Larsson told TT.

Stieg Larsson’s brother, and his father, Erland, have said that they want to make peace with Gabrielsson once and for all. In the beginning of November they offered her 20 million kronor through the Swedish newspaper Svenska Dagbladet.

Joakim Larsson said that there were no conditions attached to the offer. “We offered her the money so that she could live a financially comfortable life,” he said.

Stieg Larsson shot to fame in Sweden and abroad with his distinctive style of detective novels, which culminated in the Millennium Trilogy; the series of novels which he completed just before his death, and which were published posthumously to wide acclaim. The novels have sold 20 million copies in Europe alone, and have earned the writer’s estate an estimated 130 million kronor.

After the writer’s death, a heated debate in the media ensued about who was the rightful heir to his work. Legal proceedings found the brother and the father as the only heirs, as Larsson and Gabrielsson were never married, and did not have wills which bequeathed parts of their estates to each other. However, Gabrielssson explained that Larsson identified the book manuscripts as their pension when he submitted them to the publisher, Norstedts.

The couple lived together for 30 years. One reason why they were never married was that Larsson did not want to put her in danger, since in Expo – the magazine at which he became editor-in-chief – and in his books, he was a strident critic of Swedish neo-Nazis. A neo-Nazi newspaper published a veiled threat to Larsson’s life in 1993, for which the publisher was jailed for four months.

When they made the offer to Gabrielsson, Larsson’s father and brother said they were tired of being portrayed as the ‘bad guys’ in the story.

Gabrielsson’s lawyer Sara Pers-Krause told TT her client did not want to resolve the inheritance row through media outlets.

Larsson’s books depict a dark and violent Sweden brimming with state and family secrets, and follow the lives of Mikael Blomkvist, an investigative reporter, and Lisbeth Salander, a feisty rebel hacker-turned-detective.