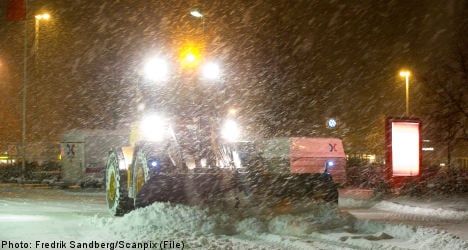 Swedish meteorology agency SMHI issued a warning on Wednesday that the expected heavy snowfall will likely cause major traffic headaches along Sweden’s east coast, in Skåne in the south, and the island of Gotland in the Baltic Sea.

According to SMHI, Gotland is likely to be hit with the worst of the storm, which is expected to dump 10 to 20 centimeteres of snow on the island, along with wind gusts of between 75 to 83 kilometres/hour.

“There may be a lot of problems, especially for the traffic situation. The gusts can lead to drifting and there is going to be a lot of snow in some areas,” SMHI meteorologist Anna Österman told the TT news agency.

SMHI is also warning people that the snow, in combination with high winds, may also cause problems for residents in Östergötland and Kalmar counties in Sweden’s southeast, as well as in Blekinge and Skåne counties in the south.

The agency has also issued a warning for gale force winds in the Skagerack and Kattegatt straits off of Sweden’s southwest coast.