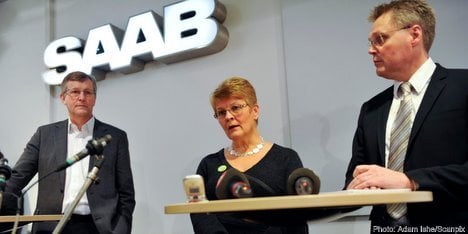 Through his company Convers Group, Antonov owns around 30 percent of Spyker and is thought to have propped up the auto manufacturer through the supporting purchases of cars.

General Motors has taken the first steps towards closing Saab Automobile. “This was an extremely surprising and very unfortunate decision,” said Sweden’s enterprise minster Maud Olofsson during a press conference in Trollhätten, where Saab’s headquarters are located, following the announcement from GM.

She emphasized that the decision was made by GM. “GM is Saab’s owner and GM could have done a lot more for Saab during all of these years,” she said.

“The government has tried to make it attractive as possible to be here in Trollhättan. Now we must help of the employees and the municipality with future savings.”

Olofsson has called for a meeting on Monday with the affected local authorities, as well as trade union and company representatives, to assess the situation. She once again reiterated that the Swedish government will not step in to save Saab.

According to John Smith, vice chairman of the GM’s board, GM realised on Friday afternoon that is was impossible to save the Swedish auto manufacturer, and that therefore was no reason to wait until next year to make a decision, as had previously been promised.

He said that the goal is to shut down operations as quickly as possible. New investors are not being sought. “We have investigated all possibilities,” the vice chairman said.

Smith reported that the GM has a ballpark figure for the cost of shutting down Saab, but declined to say how much. He blamed the car industry as a whole for the failure.

He declined to comment on questions regarding GM’s responsibility as an owner. “We have tried to integrate Saab into GM in order to create quality products. But we have been unsuccessful for a variety of reasons. We have tried,” Smith said.