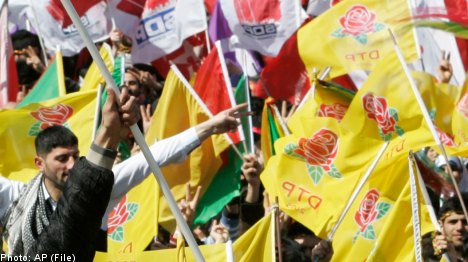 Ramazan Kizil was tried by a Turkish court on Christmas Eve for spreading propaganda in Kurdish on behalf of a prohibited political party at a political rally in Turkey.

The court found Kizil guilty and sentenced to 10 month’s prison in ruling issued on New Year’s Eve. Kizil, who returned to Sweden after last week’s court proceedings, will be arrested if he enters Turkey again, news agency TT reports.

“I have lived in Sweden for 20 years, and I have been punished for travelling to Turkey and speaking my own language and airing my opinions. It is completely unacceptable,” Kizil told news agency TT.

Kizil is one of the founders and current chair of the Dalkurd football club in Borlänge in central Sweden. On Christmas Eve he was tried in a Turkish court, accused of agitating, in Kurdish, for the pro-Kurdish People’s Democracy Party (DTP).

“I have been accused of speaking Kurdish in a public place, and they asked me why I have been with and established Dalkurd,” Kizil said.

After the court proceedings, Kizil travelled home to Sweden, to avoid incarceration if the judgment went against him. And on New Year’s Eve he was sentenced to 10 month’s prison, for spreading terrorist propaganda, according to Sveriges Radio (SR).

“They know that I will appeal to the High Court and the EU court. They don’t want the issue of the Kurdish language to stand on accused, so therefore they accused me of terrorism,” said Kizil.

The Turkish authorities have recently carried out a series of extensive actions against members of DTP, which was recently forbidden by the country’s constitutional court, according to TT.

The party is accused of having dealings with the separatist guerrilla movement, PKK, which is listed as a terrorist organization in Turkey, the EU and the USA.

According to Kizil, over 100 Kurds have been detained, accused of having dealings with Kurdish political parties.

“A coup against Kurds and Kurdish politicians is underway,” he said.

Kizil would like to see a strong reaction from Sweden and the EU against these events in Turkey.

“It is strange that the EU has not reacted earlier, and clearly, and put a stop to Turkey’s crime against democracy,” he said.