The Court of Appeal has instead ordered the man to pay a fine equivalent to 3,500 kronor ($500), Sveriges Radio reports.

The man was sentenced in October by Gothenburg District Court to eight months in prison for air traffic sabotage and violent resistance. But the appeal court found him guilty only of violent resistance, rejecting the sabotage charge.

The ruling is a setback for prosecutor Hans Göran Tommila, who had called for the 33-year-old Latvian to be given a longer sentence after he attempted to open a cabin door on board a Ryanair plane. The man was restrained by two professional boxers who happened to be on the same flight.

As cabin crew struggled to get to grips with the drunken passenger, who suffers from a fear of flying, Latvian heavyweights Roman Dabolins and Alexejs Kosobokovs intervened to prevent the precarious situation from spiralling out of control.

“We were flying to a boxing tournament at the time,” Dabolins told The Local in November.

The case follows the passenger’s attempt in June to make a mid-air exit from a Ryanair flight travelling from London Stansted to Riga. As the plane approached southern Sweden and the crew became increasingly apprehensive, the pilot felt he had no option but to land the aircraft in Gothenburg and have the unruly passenger removed.

The Latvian, who has an address in Ireland and was travelling to Riga to meet his daughter, told the district court he had a serious fear of flying. In a bid to ease his nerves, he drank a couple of beers at Stansted before starting to knock back a one-litre bottle of vodka while on the plane.

He said he had a hazy memory of screaming at a stewardess about a hot dog, but remembers little of what happened next. There were however plenty of witnesses prepared to step forward and fill in the blanks.

Around twenty minutes into the flight, cabin crew became aware of a ruckus towards the rear of the aircraft. After the 33-year-old threatened to kill a female passenger upon arrival in Riga, staff ordered him to move to the front of the plane.

The situation intensified at the front of the aircraft when the passenger made repeated efforts to approach the main door. At one point, he pushed a steward out of the way and shouted, “I want to get off the plane”.

The pilot testified that there was never any danger of the passenger succeeding in opening the door. But he added that there was a concern he would release the emergency slide inside the cabin, with potentially serious consequences.

The situation was eventually alleviated by Dabolins and Kosobokovs, who noticed that staff on board were unable to get the man to sit down. The two boxers decided to take action and made their way to the front of the plane.

The Latvian boxers grabbed an arm each and forced their 33-year-old countryman into a seat, holding him in position until the aircraft landed in Gothenburg and police climbed aboard to arrest the man.

Perhaps unsurprisingly for two heavyweight boxers, Dabolins and Kosobokovs felt they had the situation under control, and told the court they felt the decision to land in Gothenburg had perhaps been taken too hastily.

“For me, it was not a problem,” Dabolins told The Local. 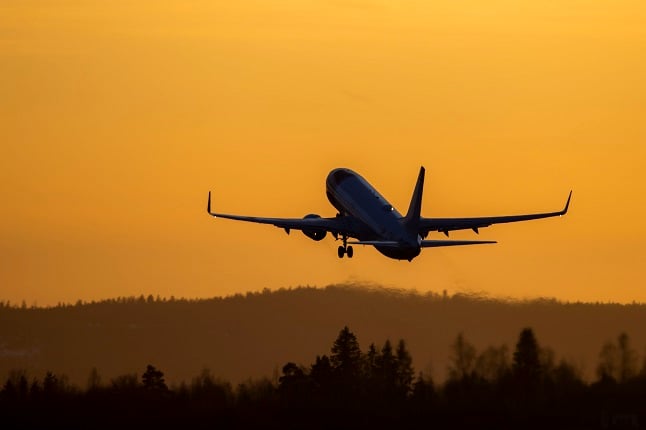 TRAVEL
Ryanair to close base at Stockholm Skavsta Airport
Url copied to clipboard!