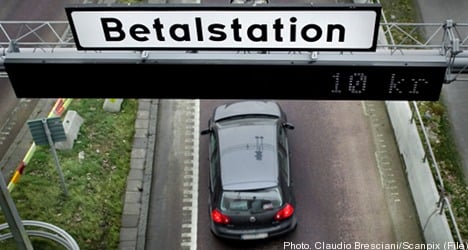 The suggestion to introduced charges by 2013 would follow the Stockholm scheme. Charges would be payable for driving within city limits set by the council on week days between 6.30am and 6.29pm.

Tourists and locals will be given an annual respite in the plan, which proposes a temporary halt to charges during the month of July.

Owners of cars classified as ‘green’ or ‘environmentally friendly’ will not be excluded from the charges and also be expected to cough up cash for the privilege of driving in the city.

The council had two alternatives when choosing the zone affected by the charges and opted for a smaller area encircled by 40 pay stations, each with a 10 kronor fee. ($1.35)

“It will be like it is in Stockholm,” said Hans Linderstad, council planning manager. “The cars will pass a overhead portal where a camera will identify their number plates.”

The proposal is part of a bigger infrastructure package for Gothenburg to the tune of around 30 billion kronor ($4 billion).

The government has pledged 15 billion kronor to invest in roadworks and public transport in the city.

Responding to comments in newspaper Göteborgs-Posten from over 1,000 displeased locals, Anneli Hultén said the decision had to be viewed from a long-term perspective.

“We didn’t really know whether it would become a reality,” she told to GP.

“It provides us with money and means we are doing our bit for the environment and climate change. When the children of today are grown up there will hopefully be a good public transport system and solid infrastructure,” she added.

Congestions charges were first launched in Sweden in 2007 when Stockholm became the first city to introduce a scheme after a trial period.