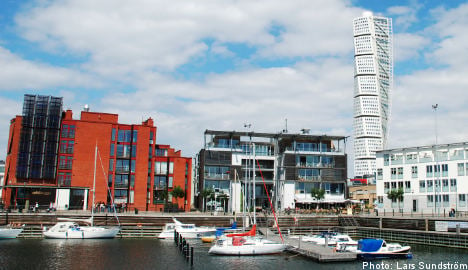 Two months on from Gothenburg’s decision to ditch its efforts to market the city internationally as Göteborg, a man in Tumba, near Stockholm, has petitioned Malmö council to explore the possibilities of similarly rebranding the southern city.

The would-be Malmö modernizer cites translations of the Swedish words mal (moth) and mö (maiden, damsel or virgin) as ample evidence of the suitability of Mothvirgin.

Focussing on another meaning for mal, the submitter also throws Catfishvirgin into the pot as an alternative appellation.

In a nod to the city’s foremost architectural wonder, the creative outsider also touts the success of Turning Torso as reason enough to go Anglophone. The building would hardly have been such a success, he supposes, had it been saddled with the Swedish title Den vridna kroppen utan armar, huvud och ben (The twisted body without arms, head or legs).

But there are solid grounds for some name change scepticism. As the largest newspaper in the region, Sydsvenskan points out that Malmö’s etymology, while shrouded in a degree of mystery, is certainly not a translation of mal and mö. Most historians believe the city’s name to stem from its twelfth century form — Malmöghae, Malmhaugar, Malmöghe — or “piles of sand”.

As The Local reported in December, mö is a word that finds itself very much on the back foot in Sweden. The Swedish Association for Sexuality Education (RFSU) led a push last year to replace the word mödomshinna (hymen), which translates literally as “virginity membrane”, with slidkrans.

Indeed, RFSU went some way toward achieving their goals when the Swedish Language Council agreed to add slidkrans to its list of official Swedish words. In total, the council added 30 new words to its linguistic roster at the end of the year.

The sexual rights group also unilaterally proclaimed a new English term for what it considers one of the most misunderstood parts of the female anatomy.

“The new term in English is vaginal corona,” it said.