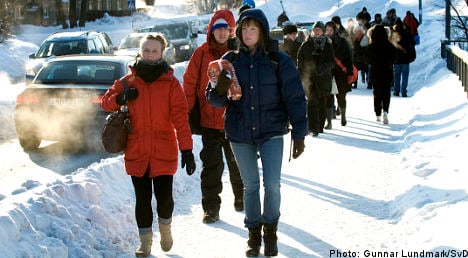 Freezing temperatures and record snowfalls caused transportation chaos for travellers in Sweden again on Monday, while the threat of collapsing buildings forced a number of schools to close.

Around one in three Swedish trains was cancelled, including all traffic on the busy Stockholm-Gothenburg route, while most other trains were delayed, Ulf Wallin, a spokesman for Sweden’s state rail company SJ, told AFP.

“Things are obviously not going well,” he said. “I would say probably 100,000 people have been affected by this.”

Delays and cancellations have plagued the rails ever since abnormally cold temperatures arrived at the start of the year, with the mercury below freezing across Sweden and dropping as low as minus 40 Celsius in the north.

In Stockholm, where temperatures lingered around minus 15 Celsius on Monday, all subway lines above ground were halted, as the local mass transport company SL scrambled to lay on replacement buses.

“I came out here at 6:45 am to try to get on a bus, but they all just sped past since they were already overcrowded when they got here,” Helene Ulman Lilja, 29, told AFP in the Stockholm suburb of Bagarmossen.

“We live in Sweden. You would think that a little snow and cold would be an easy thing to handle,” she said.

“I understand that people are irritated…. Winter is after all one of the four seasons in this country and we have to ask ourselves why we haven’t been able to handle the situation better,” he told the domestic TT news agency.

Snow blocking the rails and ice and cold freezing the outdoor switches are the main problems affecting both the long-distance trains and the subways.

“There has just been so much snow and the cold has lasted so long that the switches are not working properly,” Wallin said.

The trains themselves were also seeing more damage due to the drawn-out cold spell.

“There are long lines to all of our repair shops,” he said.

Many schools and daycare centres, as well as a large shopping centre, were closed on Monday due to the risk that heavy snow and ice could cause the buildings to collapse, according to the TT news agency.

A police helicopter was also surveying possible roof damage to a building adjoined to the Gothenburg central station, TT said.

A number of buildings have collapsed across Sweden in recent days and several people have been killed and injured.