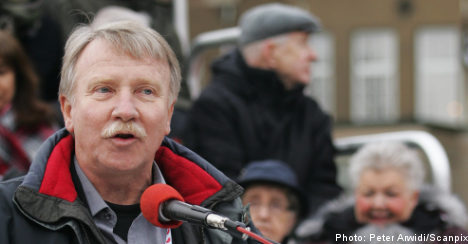 Recent comments made by Reepalu have been interpreted to apportion some of the blame for a recent escalation of anti-Semitic harassment in Malmö to Jews themselves for not taking a clear enough stand against Israel’s war in Gaza.

“There have been many examples of discrimination and attacks against Jews, not least in Malmö. The Jews deserve strong support and also one must never mix up the debate about anti-Semitism and Zionism,” Sahlin said to journalists in connection with a visit to Södertörn University in Stockholm.

“There are a number of unfortunate comments from Ilmar that came to be interpreted in that way,” Sahlin added, and underlined that she knows Reepalu well enough to know that it was not what he meant.

“He is a good person. Ilmar is no anti-Semite but is someone who fights racism, and also against the attacks sustained by Jews in Malmö. I have asked him to open a proper dialogue with the Jewish community in Malmö in order to work things out,” the party leader said.

Sahlin emphasised that no one should be subject to attack regardless of their opinion on the conflict in the Middle East.

Fresh concerns have been raised in the Swedish press this week following comments made at the weekend by Reepalu in The Sunday Telegraph.

“There haven’t been any attacks on Jewish people, and if Jews from the city want to move to Israel that is not a matter for Malmö,” Reepalu told the newspaper.

At 2pm on Thursday Ilmar Reepalu was engaged in a meeting with Fred Kahn and Fredrik Sieradzki from the Jewish community in Malmö. It was Reepalu who had taken the initiative to the meeting; Kahn and Sieradzki meanwhile were reticent about what they hoped would be achieved.

“We’ll listen to what he has to say,” Kahn told news agency TT on the way into Malmö city hall.