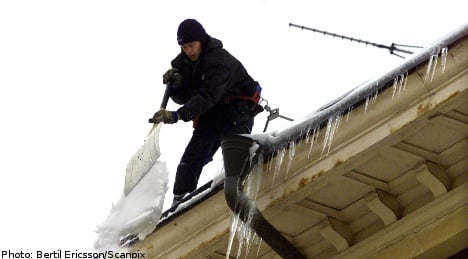 The milder weather brings with it an acute risk of serious injury to pedestrians on pavements in Swedish cities and man in Stockholm was rushed to hospital on Friday morning after being hit by falling ice. The Stockholm branch of the Swedish Property Federation (Fastighetsägarna) has issued a new warning for the overhanging hazard.

According to the federations’s CEO Tore Ljungkvist, it could take some time before all roofs are cleared and made safe as there are simply not enough people available to clear the city’s rooftops.

A man was hit by falling ice while walking on Gyllenstiernsgatan in central Stockholm on Friday. According to the police the man’s injuries are not serious and he was conscious in the ambulance on the way to the hospital.

According to media reports, there have been several incidents of inured pedestrians during the course of Friday morning which has seen temperatures creeping above zero for the first time in weeks.

Parked cars are also at risk from the threat posed by falling ice, with several vehicles destroyed on Riddargatan in central Stockholm by large blocks of ice falling from nearby buildings.

The recent spate of roof collapses across Sweden has continued with reports of a barn in Vara in western Sweden housing 800 sheep succumbing to the weight of the snow. Most of the animals are reported to have escaped unscathed.

Several traffic accidents occurred around Jönköping in southern Sweden during Thursday night, but no serious injuries were reported. SOS Alarm described the conditions faced by drivers as “ice-skating” on the roads.

With Stockholm families brushing off their skis in time for next week’s half term holiday trips to the hills, the Swedish Road Administration (Vägverket) has urged road users to seek alternative means of transport when possible.