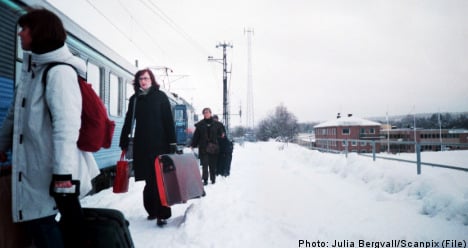 Long suffering travellers have been offered refunds as well as extended monthly and annual travel cards.

“Quite simply we want to compensate customers for what has happened. Until February 28th a lot of people were affected,” SJ press spokesperson Thelma Henrysson said.

Customers in possession of annual railcards, valid during February 2010, will automatically receive a month-long extension to their passes. The extension can be sought at SJ ticket outlets.

Cancelled trains will give the right to a full refund, regardless of ticket type. It will also be possible to re-book tickets, without extra charge, up until March 13th.

The existing SJ travel guarantee offers compensation of 25 percent of the purchased ticket price ¨for a delay of more than one hour, and 50 percent for a delay of over two hours.

Rail services remain affected during March after recent heavy snowfalls. Much of the rolling stock is in need of repairs after damage from snow and ice with many trains currently out of service.

Delays this week and next primarily affect the Stockholm-Gothenburg and Stockholm-Malmö routes and will gradually return to normal as March progresses, the firm confirmed.

“We are counting on full service in April. We have set a time limit for when we shall be back to normal. In the meantime customers can plan their journeys when they know which trains have been cancelled. The trains that are running, can run on time,” Thelma Henrysson said.