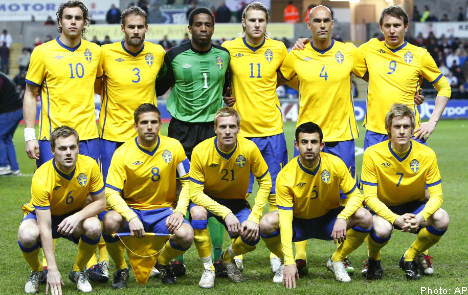 Bolton Wanderers forward Johan Elmander did his best to fill the yawning void left by Barcelona striker Zlatan Ibrahimovic’s self-imposed absence, scoring the only goal of the game just before the break.

Hamrén expressed satisfaction at the victory in the friendly fixture, although not at the often turgid manner in which it was achieved.

“In the first half most things did not work well. We were passive, did not work as a team, bad coaching,” Hamrén said to TV4.

Ola Toivonen, who Hamrén has known since he was a boy at Degerfors, was deployed as a lone striker in a nominally 4-2-3-1 system. Toivonen had a goal harshly ruled out for offside when he headed home from six yards mid-way through the first half.

Elmander, who has had a tough time in the Premier League since his record move from Toulouse in 2008, scored his 13th goal for Sweden when he controlled a corner and volleyed the ball into the roof of the net.

The match was also noteworthy for the absence of Craig Bellamy, the Manchester City striker, amid speculation that his international career may be hanging in the balance.

The Welsh had suffered a further setback in the build up to the match when the highly rated prospect Aaron Ramsey of Arsenal sustained a double fracture to his leg putting him out for the remainder of the season.

Olympiakos centre half Olof Mellberg, celebrating his 100th cap for his country, held the rearguard together well as Wales went in search of an equaliser. As expected Birmingham winger Sebastian Larsson was deployed at right back.

Sweden’s next match in the build up to the autumn Euro 2012 qualifiers is a clash with the distinctly tougher prospect of Bosnia in May.

“We shall improve a lot, a lot. For me the basis is the winning mentality. If you have that the play will come,” Hamrén said.