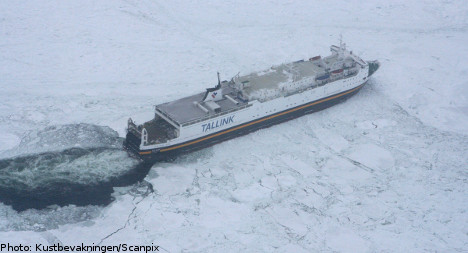 Several vessels, including a Viking Line passenger ferry carrying around 1,000 people, had collided with each other as they drifted amid huge blocks of

But the Viking Line ferry company insisted “there was at no time any danger to the passengers.”

Around 50 commercial vessels and as many as six large passenger ferries had been stuck in the ice Thursday, Johny Lindvall of the Swedish Maritime Administration’s ice breaker unit told AFP around 8.30pm.

Two of the ferries, including the large Isabella passenger ferry carrying 1,322 passengers and crew, had been freed after getting stuck off Kapellskär where the ice was at its worst, he said.

Four other ships, including the Amorella, another passenger ferry with almost 1,000 people on board, remained stuck overnight. The Amorella eventually broke free in the early hours of Friday morning

At around 12am, Sveriges Radio reported that a third vessel, a cargo ship, had been freed from the area.

The ferries, nearly all transporting passengers between Sweden and Finland, had run into trouble just outside the Stockholm archipelago, made up of more than 20,000 islands, Lindvall said.

“They got caught outside the archipelago, where there is moving ice. It’s hard to navigate,” he said, adding that he had not seen a situation with so many ships stuck at once since the mid-1980s.

Sweden has suffered an unusually harsh winter this year, with temperatures across the country almost continuously well below freezing since December.

With freezing winds whipping the Baltic over the past week, it was easy for ships to get caught in the ice, Lindvall said.

The Amorella and the Regal Star, which was the first to get snagged in the ice at around 12am Thursday and which had been on its way to Estonia, were among the vessels that remained ice-bound.

The ships were close to each other, and at least two of them had collided, according to Viking Line, which owns the Isabella and Amorella.

“Amorella and Finnfellow collided when the ships were trying to break lose from the ice” the company said on its website.

Viking Line head Jan Kaarstroem meanwhile insisted in an interview with the TT news agency that his company’s ferries were well equipped to handle ice and that all the passengers were safe.

Passengers on the Amorella had been requested to all move to the front of the boat to avoid a collision, according to Mats Nyström.

The two ships “were simply drifting towards each other,” the Amorella passenger said in an interview with Sveriges Radio.

Another passenger, 55-year-old Rigmor Okoli, said it was frightening just drifting out on the Baltic Sea.

“It is so dark everywhere,” she told the Expressen tabloid’s online edition.

“We have no idea how or when we’ll get home.”

Three ice breakers are in the area where the ferries are stuck. Before the third one arrived late Thursday, Lindvall told AFP he expected the remaining ships to “be stuck there until tomorrow morning at least.”

Many of the commercial vessels had meanwhile got stuck in the narrow Bay of Bothnia, where the ice is thicker, and around the autonomous Åland islands, Lindvall said.