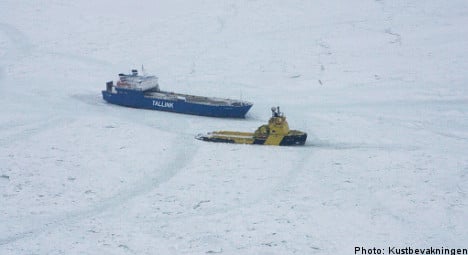 “There are no more ships stuck in the ice,” Ann Ericsson of the Swedish Maritime Administration’s ice breaker unit, told AFP.

A number of vessels, including several large passenger ferries shuttling as many as 1,000 passengers each between Sweden, Finland and Estonia, become stuck Thursday just outside the Stockholm archipelago, where freezing winds had pushed thick ice towards the coast.

“We have not slept much,” Lena, a passenger on the Amorella ferry that broke free from the ice early Friday, told Sveriges Radio (SR).

“We’ve been interested in watching all the ice breakers and helicopters work.”

Two small ice breakers on Thursday failed to free the Amorella and several other smaller ferries, which had been forced to wait for the larger Ymer ice breaker to sail down from the Bay of Bothnia in the north.

There it had been working to free as many as 50 cargo ships and commercial vessels, some of which had been stuck for days, and in one case since last Saturday, according to the maritime administration.

Twelve ships were still docked near the central port city of Sundsvall for that ice breaker to return to escort them out, according to Ericsson.

“They’re waiting for help, but none of them are stuck,” she said, adding that the winds had died down and conditions at sea had become easier.

The Amorella ferry, which has the capacity to carry up to 1,313 passengers and crew, had collided with a Finnfellow ferry trapped nearby while trying to free itself from the ice.

Its owner Viking Line however insisted no damage was done to the ship and that there had at no time been any danger to the passengers.

Passengers on the Amorella were requested to move to the front of the boat to avoid any collision impact, according to Mats Nyström, one of the passengers.

The two ships “were simply drifting towards each other,” he told SR from the stranded ferry.

“The staff panicked more than us tough truck drivers,” he added.

The Swedish Maritime Administration issued a warning to ships not to take the route where most of the ferries became stuck.

“They got caught outside the archipelago, where there is moving ice. It’s hard to navigate,” Johny Lindvall, also of the Swedish Maritime Administration’s ice breaker unit, told AFP Thursday, adding that he had not seen so many ships stuck at once since the mid-1980s.

Sweden has suffered an unusually harsh winter this year, with temperatures across the country almost continuously well below freezing since December.

The large ferries are equipped to break their way through the thin layers of ice that often cover parts of the Baltic they traffic, but Swedish maritime authorities criticised their decision to ignore its warning and attempt to take the treacherous route near the Stockholm archipelago.

“The problem is that these big ferries think they can handle the ice. They have extremely powerful engines, but in this case the ice was simply too difficult for them,” Ulf Gullne, also of the administration’s ice breaker unit, told SR.