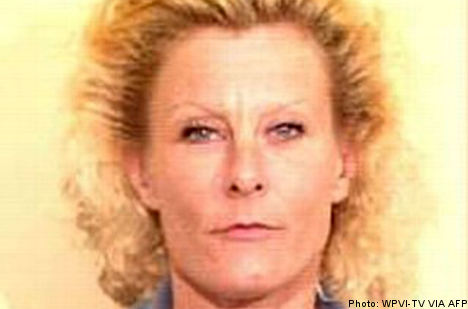 The woman, named as Colleen LaRose was arrested in Philadelphia on October 15th 2009, but he involvement was confirmed by US authorities only hours after Irish police arrested seven people accused of plotting to kill the Swedish artist, who courted controversy in 2007 for for drawing cartoons depicting the Prophet Muhammad as a dog.

In her indictment released by the US Justice Department on Tuesday it is shown that LaRose faces charges of “conspiracy to provide material support to terrorists, conspiracy to kill in a foreign country, making false statements to a government official and attempted identity theft.”

Over the course of at least a year, she is alleged to have used the internet to recruit men in South Asia, Europe and the United States for terror attacks.

She is also accused of recruiting women “who had passports and the ability to travel to and around Europe in support of violent jihad,” and of having stolen a US passport “and transferred or attempted to transfer it in an effort to facilitate an act of international terrorism.”

The indictment alleges LaRose received two messages in March 2009 from an individual in a South Asian country instructing her to kill an unnamed Swedish resident. A US government official confirmed to CNN that the target was Vilks and the charges relate to Tuesday’s arrests in Ireland.

“Kill him… this is what i say to u,” the indictment quotes one message as saying. “Kill (the individual) in a way that the whole Kufar [non-believer] world get frightened,” the second said.

“I will make this my goal till I achieve it or die trying,” LaRose allegedly responded.

An Al-Qaeda-linked group has placed a $100,000 bounty on Lals Vilks’ head in response to a cartoon he drew depicting the Prophet Muhammad with the body of a dog.

The indictment alleges that LaRose – born in 1963 – last March “sent an electronic communication to the Swedish embassy asking for instructions on acquiring permanent residency status in Sweden.”

She is also said to have “traveled to Europe with the intent to live and train with jihadists” in August 2009.

In September 2009, LaRose allegedly sent a message reiterating her commitment to kill, adding “only death will stop me here that i am so close to the target.”

LaRose, also identified by the monikers “Fatima LaRose” and “JihadJane,” faces life in prison if convicted.

A MySpace page under the name “JihadJane” features a biography of a Pennsylvania woman who describes herself as having “reverted to Islam.”

“I live in Pennsylvania, originally from Texas. I have recently (a couple months) reverted to Islam and I can safely say that of all the things I have ever done in my lifetime, bcomming Muslim is what i am the proudest of.”

Elsewhere, the user lists her heros as “Skeikh OBL,” an apparent reference to Al-Qaeda leader Osama Bin Laden, and “The brothers in… Jihad.”

The indictment and material released by SITE, a US group that monitors extremists, suggest LaRose had an active online presence, despite being repeatedly banned from websites including YouTube and harbouring fears she was under surveillance.

SITE released a message purportedly posted by LaRose on an English-language jihadist forum that directly addressed those she thought were monitoring her.

The case “demonstrates that terrorists are looking for Americans to join them in their cause, and it shatters any lingering thought that we can spot a terrorist based on appearance,” said US Justice Department attorney Michael Levy in a statement.

In communications detailed in the indictment, LaRose is alleged to have said her appearance would allow her to “blend in with many people,” adding it “may be a way to achieve what is in my heart.”

Profile pictures on the “JihadJane” MySpace page include one showing a fair-skinned woman with blue eyes, her hair covered by a headscarf.

“Today’s indictment, which alleges that a woman from suburban America agreed to carry out murder overseas and to provide material support to terrorists, underscores the evolving nature of the threat we face,” he said.