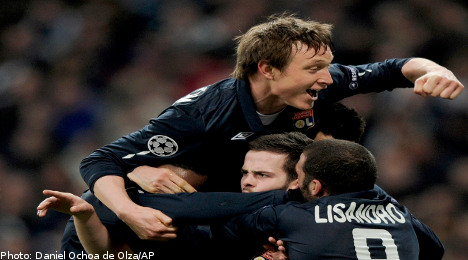 After winning 1-0 in their home leg Lyon came away from the Santiago Bernabéu with a 1-1 draw, sufficient to claim a place in the last eight and condemn big-spending Madrid to a sixth consecutive exit at this stage of the competition.

Real Madrid’s expensive line up of stars started the game at full throttle launching wave after wave of attacks on the Lyon rearguard, marshalled by the superb Hugo Lloris in goal.

Expectant Madrid fans did not have to wait long for the opening goal and it came in the familiar guise of record-signing Christiano Ronaldo after he surged down the left flank and shot left-footed into net for his seventh goal in six Champions League matches.

The Spanish team should have had the game out of sight by the break but were not able to build on their lead despite a wealth of good chances.

Lyon made two changes at the break, bringing on Swedish player Kim Källström and Maxime Gonalons, which seemed to revitalize the French champions who started to threaten Ilker Casillas’s goal.

As the game neared 75 minutes Bosnian Miralem Pjanic provided the decisive finishing touch to a move involving Källström which all but killed off the challenge of Real Madrid when he made no mistake with a firm shot from 12 yards.

Lyon missed a golden opportunity to take home a victory on the night when Lisandro Lopez dragged wide with the goal at his mercy but the French team will care little as they line up in the quarter-finals for the first time since 2006.