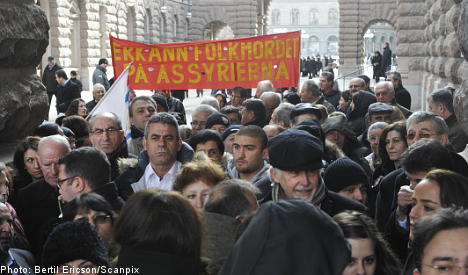 Though the motion to recognize the genocide of Armenians and other ethnic groups – Chaldeans, Syrians, Assyrians and Pontian Greeks – had the backing of members of five of the seven Swedish parliamentary parties, the vote’s outcome was uncertain to the last as the Parliamentary Committee on Foreign Affairs had recommended its rejection.

But with four centre-right politicians ignoring the recommendation and choosing to vote with the opposition, the resolution was eventually passed by a single vote.

Turkey immediately elected to recall its ambassador to Sweden, Zergün Korutürk, who said she was “very, very disappointed” by the vote.

“I’m disappointed and somewhat surprised because I expected the parliament to adopt the normal position that it is not the job of parliamentarians to decide whether or not a genocide has taken place.

“That is a questions for historians, and for researchers to examine before reaching a conclusion,” she told news agency TT.

Zergün Korutürk added that Sweden and Turkey had enjoyed excellent relations over the last decade but that this was now certain to change.

“Everything is going to regress. This is going to have a drastic impact on our bilateral relations,” she said.

Speaking to The Local prior to the vote, Left Party foreign policy spokesperson Hans Linde expressed his view that the time had come for Sweden to take a stand on the issue.

“Firstly, to hinder any repeat and to learn from history. Secondly, to encourage the development of democracy in Turkey – which includes dealing with their own history. Thirdly, to redress the wrongs committed against the victims and their descendants,” Linde said.

The foreign affairs committee, in its comments on the motion, had argued for an open debate on the issue. It also stated that the persecution of the Armenians and other ethnic groups in 1915 would have constituted genocide according to the definition adopted by the United Nations in its 1948 genocide convention if it “had it been in force at the time.”

But the committee stated that it does not consider it parliament’s role to rule on human rights issues and that this should instead be addressed by “open research, open access to facts, and free debate.”

Sweden’s Minister of Foreign Affairs Carl Bildt agreed with the committee’s position in comments on his blog on Thursday. Under the heading “Don’t politicize history,” Bildt wrote:

“A politicizing of history in this way risks undermining ongoing reconciliation processes, plays into the hands of those opposing normality in Armenia and reform in Turkey… and creating new tension in Swedish society.”

The committee concluded in its comments that the Turkish government has in recent years made some movement on the issue, with conferences arranged on the subject as well as broader media debate.

The Swedish parliament has voted on the issue before, even approving a report in 2000 recognizing the disappearance of as many as 2.5 million Armenians, Chaldeans, Syrians, Assyrians and Pontian Greeks from April 1915 as genocide. But the recognition was later withdrawn “on a technicality”, Hans Linde told The Local.

“The parliament also voted against recognition (by 245 to 37) in 2008. The difference this time is that the Social Democrats have changed their position,” he said.

Carl Bildt claimed in his statement that the Social Democrat parliamentary group was forced to change standpoint on the issue as a result of a party congress vote, arguing that there are “several that feel deep unease over this.”

According to Sweden’s Living History Forum, most researchers are now in agreement that the massacres constituted genocide according to the accepted 1948 UN definition. The exception to this is Turkish researchers. The Turkish government has never recognized the events as a genocide and it is illegal in Turkey to claim that it occurred.

The Living History Forum is a Swedish public authority which works with issues on tolerance, democracy and human rights from both a national and international perspective.