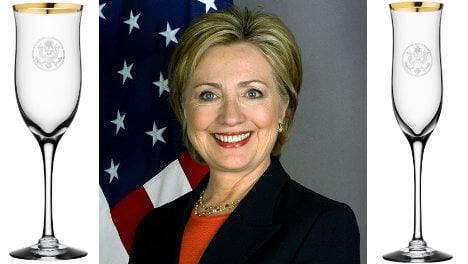 The items are to be embellished with the seal of the United States and used for functions at 400 embassies and ambassadors’ residences worldwide.

“We are very happy and proud to have won the contract. We are hopeful that this prestigious order will boost our international sales – especially in the USA,” company spokesperson Eva-Marie Hagström told The Local on Tuesday.

The order has however been met with angry reactions from some quarters in the US who feel that the contract should have gone to an American firm.

“Hillary Clinton’s State Department is spending $5.4 million to buy fine crystal stemware for American embassies – but it won’t give the US economy much of a boost,” the New York Post tabloid reported on Monday.

Politicians have also expressed concern over sending the prestigious contract overseas while unemployment remains high in the US.

“This is about fighting for American jobs. The US government should not turn its back on American workers and send job opportunities abroad,” Republican Pat Tiberi and Democrat Eric Massa wrote in a letter to Hillary Clinton two weeks ago, according to news agency TT.

The firm, located in Sweden’s Kingdom of Crystal in rural Småland in southern Sweden, explained that it had brought home the order in the face of stiff competition and that the US state department had warmed to the firm’s environmental profile.

“We won the contract for our design but they were also interested in our lead-free products and environmentally-friendly approach to glass making,” Eva-Marie Hagström said.

The specially designed glass dinnerware series is taken from a classic Orrefors model created by Gunnar Cyrén and has been given the name Jasmine.