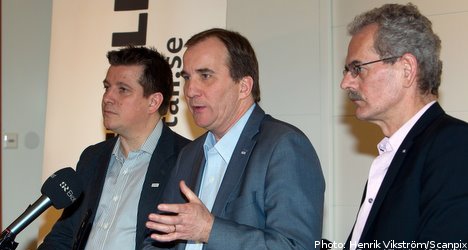 “It is obviously less money this time, but there are other crucial issues that are important for the future,” Veli-Pekka Säikkälä, negotiator for IF Metall, told the TT news agency.

“Without broad union coordination within the Landorganisation (trade union confederation – LO) the question of temporary employment agencies would have never been resolved. Now our members will received wage increases despite the employer’s offer (of nothing) and a strengthened right to re-hiring,” Stefan Löfven, IF Metall chairman, said in a statement.

The agreement translates to an average salary increase of 742 kronor per month. Every employee has a individual guarantee that his or her wage will have increased by at least 392 kronor per month by August 1st 2011.

“The cost increases are in line with the rest of Europe and are at the same level as in the agreement for white collar workers,” said Anders Narvinger, head of the Association of the Swedish Engineering Industries (Teknikföretagen). He also emphasized that the issue of the use of temporary employment agencies has been addressed.

IF Metall’s chairman Löfven of IF Metall is also satisfied with the agreement.

“There is always a bit more that you might want, but at the same time we need to remember that the industry is in a major crisis and has declined by 20 percent since 2008.”

He called attention to the fact that the auto industry has had an even rougher go of it. Löfven believes that the strengthened preferential right is a major step forward for members.

“We have added six months to what is already statutory,” he said.

Around 7000 white collar workers within mining, steel and metal are also covered by another agreement made by Unionen. They will receive a 3.2 wage increase for 22 months. In addition, .2 percent of annual wages will be set aside in individual accounts for professional development.

“I am satisfied by the agreement,” Unionen chairman Cecilia Fahlberg told TT.

The Swedish Association of Graduate Engineers (Sveriges ingenjörer) has also accepted a wage increase of 3.2 percent for 22 months.

“They are not likely to be re-opened before the end of the weekend or at the beginning of next week,” GS press secretary Annette Vahlne told TT.