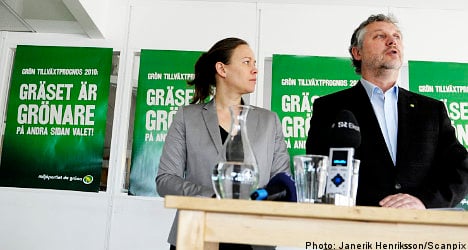 The party laid out its election manifesto proposal on Tuesday promising a “Green New Deal” with a focus on jobs, climate change policy and global solidarity.

“Cutting sales tax is, in the longer term, a better solution for companies within the services sector than a system where certain companies become dependent on subsidies,” said Green Party spokesperson Peter Eriksson to journalists in reference to the so-called RUT deduction for household services.

The party has forecast that sweeping cuts in sales tax from 25 percent to 12 percent for the services sector would cost an estimated 12 billion kronor ($1.66 billion).

“We want to move on from the current consume and discard society… It should be cheaper to fix broken things, to eat in restaurants, go to the hairdresser or fix your bike,” the party wrote in its election manifesto proposal which will be put to the vote at the party’s congress in Uppsala in May.

The party declared that it is conscious of the challenges faced by certain groups, such as parents, to thrive in the workplace and maintain a sustainable work-life balance and the party therefore wants to cut the statutory working week and reintroduce a sabbatical leave year.

Peter Eriksson explained that the sabbatical year is also a means for generating labour market opportunities for marginalized groups, such as young people, to get a foot on the employment ladder.

The sabbatical leave year was introduced in 2005 on the initiative of the Green Party. The scheme meant that anyone who had worked for at least two years could take a break from working life for 3-12 months and receive 85 percent of their entitlement to unemployment benefits. A condition of the system was that a substitute was found to fill the position. The scheme was abolished when the Alliance government assumed power in 2006.

The party has furthermore proposed a cut in payroll taxes for small businesses by ten percentage points, with a larger cut for a company’s first staff member during the first year of employment.

The pension age should be made more flexible, the party argues, with the possibility for workers nearing 65 to cut their working hours.

The party also proposed the introduction of a general statutory unemployment insurance scheme and that parental leave be divided into three equal parts – one for each parent, and one to be disposed of as the couple see fit.

The party also repeated its long held position that arms exports should be phased out and that taxes should be raised on energy consumption.

The Green Party is seeking a mandate to govern Sweden as part of a three-party coalition which also includes the Social Democrat Party and the Left Party.

The parties announced on March 25th that they had allocated 10 percent of their respective election budgets to joint campaign initiatives but will not, in contrast to the Alliance coalition, be parading under a joint logo.