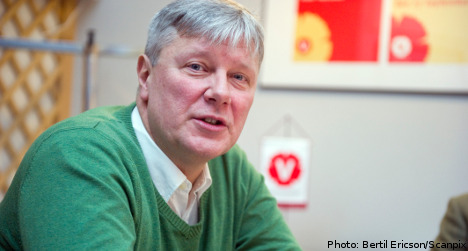 “Thank you very much for the invitation that I have received, but I do not feel like a close relative and am opposed to the monarchy as an institution. Therefore, I think it would be wrong for me to participate,” said Ohly to news agency TT.

The Left Party has no plans to send a gift to the bride and groom.

“But we wish them every success and hope that they will be happy in life,” he said.

The royal invitations were sent out this week.

Ohly is set to be alone among the opposition leaders in taking a stand against the monarchy. Green Party spokespeople Maria Wetterstrand and Peter Eriksson will both accept the invite to attend the various ceremonies, as well as Social Democratic party leader Mona Sahlin.

Sahlin has said on several occasions that it would be her pleasure to attend the wedding.

Despite the fact that the abolition of the monarchy is, and always has been, a core requirement in the Social Democratic party manifesto, the party also decided to send a wedding gift – a standing subscription to the Folkoperan opera house.

Sahlin has defended the party’s principled position but has concluded that public support for the monarchy supersedes party objections.