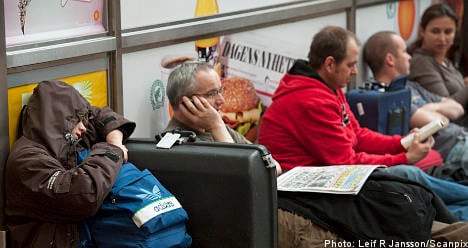 Air traffic will come to a halt at all airports bar one by 6pm on Thursday. Visby airport on the island of Gotland is to continue operating flights until 10pm.

Katarina Samuelsson was one of many passengers at Arlanda airport hit by cancellations.

“We were supposed to fly to London at 11.10am but the flight was cancelled.”

She and her friend were making a last gasp attempt to get out of the country before services ground to a complete halt and were hoping to secure tickets to New York.

“We’re flexible and will go wherever the flights are going. We don’t have any set destination; we’re quite adventurous,” she said.

Sören Carlander from Norrtälje had booked a flight to Iceland to see one of the country’s volcanoes, little realising that it would reach him first.

“When I saw the first eruption on TV last week I thought: I have to see that,” he said.

Though the plane he had hoped to travel with had not even left Iceland, he said he still harboured hopes of arriving in Iceland later in the evening.

Aviation authority (LFV) spokesperson Jan Lindqvist said LFV was attempting to release information to the general public via the media and its own website. Lindqvust said he understood the frustration felt by many travellers who had complained about the lack of information.

“It’s hard for us to forecast how air traffic is going to function. We’re working on obtaining information from air traffic control, which has contact with meteorologists and others who are explaining the consequences this might have,” he said.

Airlines are then informed of developments by LFV before passing on the latest information to their own passengers.