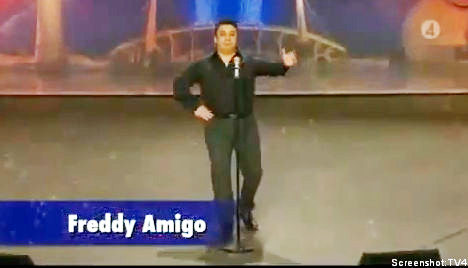 Amigo, 47, fell to his knees in tears as a three-person jury and studio audience rewarded his stirring rendition of ‘Granada’ with a standing ovation.

“It’s difficult to describe,” Amigo told TV4 when asked about his Talang debut.

“It felt great and powerful, I’ve never experienced anything like it.”

“It was a magical performance, he’s better than Paul Potts.”

Freddy Amigo moved to Sweden from Chile as a teenager thirty years ago. He currently lives in Västerås, 100 klometres west of Stockholm, with his wife and three children. For the last fifteen years he has worked as a nurse in the town’s main hospital where he regularly entertains the older patients.

“I love my old ladies and gents. It’s a great warm feeling to be able to sing for them. Their happiness means a lot to me,” he said.

Before starting a family, Amigo provided the vocals for a local band specialising in Latin-American music. His singing career was put to one side however when he began the business of training to be a nurse and raising children. But his favourite pastime has been resurrected in recent years.

“Everything started three years ago when a workmate asked if I’d sing Ave Maria at his wedding. Sure, I thought, even though I’d never sung opera before. Everyone in the church started crying, including me; even the priest was crying,” he told TV4.

Amigo said he had never intended to make a late push for stardom, but his daughter insisted on submitting an application to Talang on his behalf.

“My first reaction was that I was too old, but she sent away the form anyway, saying: ‘but you are a talent, daddy’.”