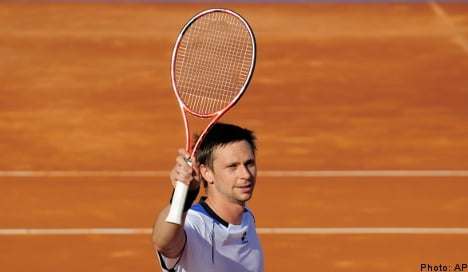 Second seed Söderling, the 2009 Roland Garros finalist, will be the first from his country to bid for the title at the Real club since Magnus Larsson a decade and a half ago.

He will aim to become the first Swedish winner at the tournament since Kent Carlsson 22 years ago when he tackles Spanish fifth seed Fernando Verdasco in Sunday’s title match.

Söderling will seek to smash a long-standing Spanish stranglehold at the claycourt event. Spaniards have played in the last 13 Barcelona finals dating back to 1997 and have won the trophy through Nadal (2005-2009), Tommy Robredo in 2004 and Carlos Moya in 2003.

“So far it feels very good. My form is getting better with every match. I managed to get some easy points on serve and worked the points well with my forehand,” said Söderling.

“I’m moving better and feel like I’m getting pretty close to where I played my best tennis on clay last year.”

Söderling, who opened his clay campaign only this week after resting a minor knee problem, ran away against De Bakker, playing his first semi-final on the ATP Tour.

He took the first set in 32 minutes and reached 4-0 in the second before his 21-year-old opponent could react.

De Bakker broke for the first time for 2-4 and threatened again with a break point in the final game, which Söderling saved.

The second seed managed his third ace with perfect timing to bring up match point, quickly wrapping up the tie after 75 minutes.

Ferrer lost title bids in 2008 and 2009 to Nadal as the four-time Roland Garros champion, who skipped this event, swept to his five straight titles.

Verdasco was proud of his fightback effort.

“I’m very happy to be in my first final here. I’ll work to recover and hope not to wake up too tired,” said the world number nine.

Ferrer and Verdasco duelled for 66 minutes in their opening set before Ferrer took it in a tiebreaker.

Verdasco got back into contention in the second, which he won by breaking Ferrer twice after falling behind 2-3 on a break of his own serve.

In the third, Verdasco was untroubled as he dominated to secure the victory.

“The first two sets took two hours, but I gained confidence when I came back from a break in the second set,” said the winner.

“I felt heavy in the legs in the first and was moving poorly. But I got better as we played on.”