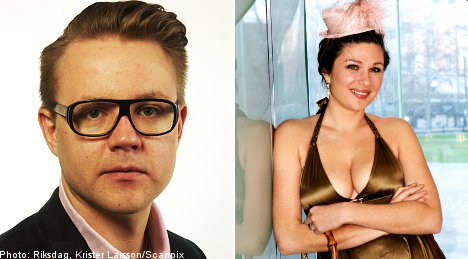 Federley and Pecynski opened their salad bar near Stureplan in central Stockholm in the spring of 2007. The purpose, aside from making money, was to demonstrate defiance to union demands to sign up to collective bargaining agreements.

But the project soon turned sour with Federley arguing that the landlord had not equipped the premises as agreed and the unlikely duo subsequently stopped paying the rent. The salad bar quickly went bankrupt and the landlord demanded the outstanding rent plus other costs.

Federley and Pecynski have now reached an agreement in Stockholm District Court to hand over 300,000 kronor to settle the dispute.

The pair opened their salad bar after being inspired by a battle fought by Sofia Appelgren, who was famously forced to sell up her Wild’n Fresh salad bar in Gothenburg after having being blockaded by the Hotel and Restaurant Union (Hotell- och restaurangfacket – HRF) for over four months.

The celebrity owners made an unsuccessful bid for Wild’n Fresh after accusing the union of applying mafia methods in its bid to convince Applegren into signing a union agreement.

“Having angry old men and women standing outside the entrance to your company, wearing orange vests and handing out flyers about how your company is evil incarnate, would be enough to make most people puke,” Percynski said at the time.

“But not Fredrick and me. That’s the sort of thing that gets us going,” she said.