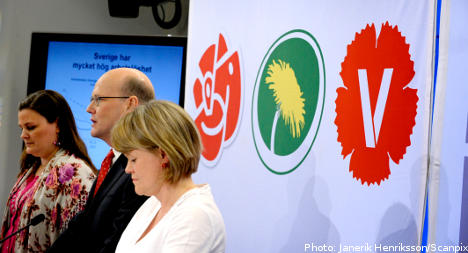 The Red-Green coalition press conference was opened by the Social Democrat party economic spokesperson Thomas Östros who pledged a series of changes to help to finance investments in environmental initiatives as well as labour market and taxation reforms that will see taxes rise by a total of 24 billion kronor.

“Sweden shall return to budget surplus and strong public finances. Sweden’s competitiveness shall be reinforced, we suggest significant investments in new jobs, training and education. Among other things we want to expand the university system, strengthen labour market training programmes and cut payroll taxes for small companies,” Östros said.

The three parties – the Social Democrats, Green Party and Left Party – announced that the defence budget would be cut by two billion kronor ($275 million) to help to finance the changes.

The coalition meanwhile announced plans to abolish the cut in payroll taxes directed towards people under 26 introduced by the Alliance government, providing for a saving of 10 billion kronor.

“This has created very few job opportunities and will be compensated by the general cut in payroll taxes for small companies,” Östros said of the reform which will cost six billion kronor in 2012.

The trio have agreed to leave income taxes relatively unchanged with monthly incomes of up to 40,000 kronor enjoying existing tax reductions, with a gradual phasing out of the tax break for those earning up to a ceiling of 80,000 kronor per month.

The coalition argued that their joint budget proposal is intended to redistribute wealth from the better off, whom they argue have benefited disproportionately from the government’s tax cuts. The intention is also to reduce differences in taxation levels for groups in work and those outside of the labour market, such as the sick, unemployed and pensioners.

“A gulf has been introduced in the taxation of pensioners,” Östros said, claiming that Sweden is unique worldwide in levying higher taxes on pensioners than those in work.

“This is a question of protecting the Swedish model, with strong, responsible unions that contribute to stability in the workplace and who are big enough to negotiate collective pay agreements,” said Ulla Andersson of the Left Party.

The opposition meanwhile ruled out making membership of an unemployment insurance scheme compulsory.

Those living in homes valued at more than 4.5 million kronor will pay higher property taxes and a form of wealth tax (abolished by the government in 2008) is set to be reintroduced, raising a projected four billion kronor from 2012.

“We don’t want to reintroduce the old system, which had clear faults, but we have agreed to conduct a review and as a result of that, introduce some form of tax on the wealthy,” said Mikaela Valtersson of the Green Party.

The opposition furthermore plans to abolish the tax deduction for household services (RUT-avdrag) that the government claims has generated 7,000 jobs during its tenure.

They will however retain the tax deduction for home repairs and maintenance (ROT-avdrag) as part of a programme of initiatives addressing the environment, to include investments totalling 120 billion kronor in railways and public transport by 2021.

Part of this programme is a plan to double the construction of climate smart rental apartments (hyresrätt) during the next mandate period with the introduction of 1.4 billion kronor in state support as well as a general 12 billion provision to the municipalities in 2011 and 2012.

Alcohol and tobacco taxes are also set to rise to pull in a further two billion kronor.

According to their calculations the Red-Greens advise that 55.4 percent of their reforms benefit women – the big losers under four years of Alliance government rule, they claim.