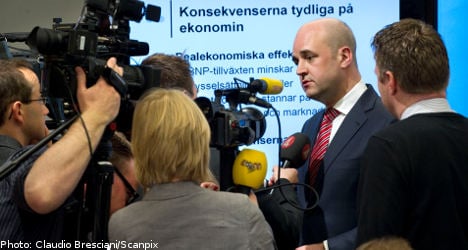 “Thomas Östros said yesterday that we (the opposition coalition) will not raise taxes for low and middle-income earners. But taxes will be raised for three million wage-earners,” said Fredrik Reindfeldt at a press conference on Monday evening.

The main tax effect will occur as a result of a progressive phasing out of a working tax credit for those earning above 40,000 ($5,500) and the changes made to unemployment insurance charges, Reinfeldt argued.

Changes to income taxes were however comparatively marginal with 69 of the 71 billion kronor in tax cuts introduced by the Alliance government left unchanged, a point Reinfeldt argued was noteworthy considering the criticism Social Democrat leader Mona Sahlin had levied at the government on the issue during the mandate period.

Sahlin responded in a televised SVT debate on Monday evening that “the clock can not be turned back”, before adding that the “cuts would never have seen the light of day under a Red-Green government”.

The prime minister also criticised his opposition counterparts, who announced a total of 24 billion kronor in tax rises on Monday, of “talking about millions but hiding billions.”

“The major changes are hidden,” he claimed.

“There seems to be a secret person somewhere in the woods from whom money can be extracted.”

In the end the taxes are always lumped onto regular income earners, Reinfeldt says.

“Higher taxes do not disappear. When transport costs increase for freight firms then it is levied on the customers, he said.

Reinfeldt saved his most stinging criticism for what he argues is the dismantling of the government’s policy for jobs.

Finance minister Anders Borg spoke about a “costs sledgehammer” which he claimed would lead to higher unemployment.

Borg claimed that the the higher taxes on fuel, transport and property, hike payroll taxes for those under 26 and the abolition of the tax deduction for household services (RUT-avdrag), will lead to an increase in inflation from 0.5 to 1.0 percent.

“One percent inflation cuts purchasing power by 15 billion kronor. It is a risky strategy,” he said.

Interest rates will increase and for households with average incomes mortgage payments can expect to climb by 5,000-10,000 per annum, Borg claimed.

The Confederation of Swedish Enterprise (Svenskt Näringsliv) claimed that the “Red-Green” economic policy will cause concern in a slew of sectors, including the transport and forestry industry.

The organisation also expressed opposition to the abolition of the tax deduction for household services, which would impact jobs within the private service sector.

The Swedish Confederation of Professional Associations (Saco) meanwhile welcomed the raised ceiling in unemployment insurance to 930 kronor per day in 2011, but regretted that the budget did not offer hope of a more extensive review of the tax system.

“We would need to be more broad, simple and transparent taxes with fewer deductions and exemptions,” Saco chairperson Anna Ekström said.

“Sweden has the world’s highest marginal tax rates, and a tougher taxation of income and employment is likely to impact on new jobs,” she said.