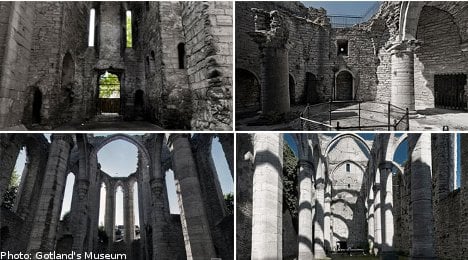 The Gotland Museum now hopes that the ecclesiastical venues will prove popular to couples and other groups looking to organise parties and events, with the revenues reinvested in the upkeep of the buildings which date back as far as the 13th century.

“Cultural heritage is an integral part of the living world heritage site that is Visby. The church ruins are an asset for the city and tourism which should be made use of, but also used with care,” said museum head Lars Sjösvärd in a statement.

Reservations are reported to be strong for the summer with 20 weddings already booked in, with the revenue used to maintain the historic sites.

“The revenues from the rentals will be re-invested in the church ruins development and management and in the longer term their use will guarantee their preservation,” Sjösvärd said.

Among the venues available included the church and monastery of St.Karin which was founded as a convent by the Franciscan order in 1233, with the church built at the end of the 14th century.

Recognised as the most dramatic of Visby’s ruins, St.Karin’s houses 500 guests and according to the museum website is also suitable for theatre performances and concerts.

Another option could be the more intimate ruins of the Church of the Holy Spirit. Built around 1200 and once the domain of pilgrims and crusaders, it is now considered suitable for groups of 100 or less and provides views of the city from an upper promontory.

With such evident attributes the dramatic medieval ruins of Visby look set to claim their place alongside some of Sweden’s more exotic and unorthodox wedding venues.

The Ice Hotel in Jukkasjärvi has in its short history become the destination which is perhaps the most recognised outside of Sweden. The hotel, which offers a wedding venue and accommodation in rooms entirely constructed of ice, was created in the early nineties and has become a fixture on the exotic winter weddings market.

“We host around 150 wedding during the season from January to April and I would say 70 percent come from overseas, with perhaps 30 percent coming from the UK. Wedding have always been a very important part of our business,” Victoria Skeidsvoll at the Ice Hotel told The Local on Thursday.

The Stockholm Globe Arena and specifically the addition of the new SkyView attraction transporting visitors to the top, is set to offer a wedding alternative for the altitude-adept and provides breathtaking views of the capital.

While wedding couples can now simply hire the glass gondola to complete their nuptials, the spherical landmark proved an altogether more daunting challenge for Frida and Thomas Stannow Lind back in 2002. The avid climbers completed their ascent to the summit on ladders suspended under the domed roof to ensure their special day was just that little bit more memorable.

The Globe Arena offers the gondola for hire for weddings while offering other less-daring alternatives within the leisure complex – such as on the ice of the Bajen hockey team, or in the centre circle at the nearby home of the Hammarby football team.

For the more modestly inclined the small fishing huts located on the sweeping beaches of Knäbäckshusen in the Österlen region of southern Sweden hide the miniature chapel of St.Nicolas, owned and operated by the parish of Rörum and a popular spot for a seaside wedding.

Swedish living history also provides other alternatives for those looking to break the mould with a Viking theme being a popular alternative.

With royal wedding fever building up towards the June nuptials of the Crown Princess Victoria and Daniel Westling Gotland’s move to capitalize on its medieval history would appear to be a timely one.