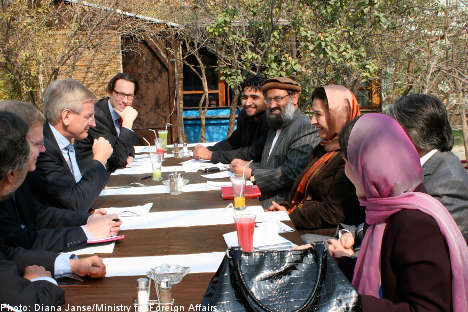 “Exit dates are first wrong and second dangerous and I don’t want to send the message to the Afghan people that we are going to abandon them at one point in time,” Bildt, who had just returned from a three-day trip to Afghanistan, told reporters in Stockholm.

“The fact that certain messages (on international troops exiting the country) have been sent in the past, on numerous occasions, is one of the reasons that we have the difficulties in Afghanistan today,” Bildt insisted.

In a meeting with Afghan President Hamid Karzai, Bildt had stressed Sweden’s commitment to the country was “a long-term one to the development of Afghanistan, to setting up state structures, to stability, to economic and social development, human rights.”

“That is not going to be finished in the next few years,” Bildt said.

Stockholm on Thursday named Torbjörn Pettersson, the current president of the Swedish Committee for Afghanistan, as its new ambassador to Kabul.

It also appointed the current ambassador to Serbia, Krister Bringeus, as a civilian representative to Mazar-i-Sharif, a city in the north of the country where some 500 Swedish troops are posted.

Bildt said the office in Mazar-i-Sharif would “give the possibility to have closer contact and dialog with both the Afghan authorities and the Afghan society.”

The increased political presence in the country could allow “the possibility for a stronger Swedish role in contributing to the implementation of a collective international strategy for Afghanistan,” Bildt said.

Four Swedish troops have been killed since Stockholm sent troops to Afghanistan in 2002 to take part in a NATO-led International Security Assistance Force (ISAF).