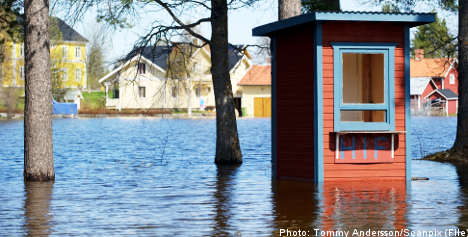 Meteorological agency SMHI has issued an extreme flood warning for the inland county of Jämtland, where water levels have led to flooding on a stretch of the Fjällsöälven river between the two lakes Ormsjön and Lesjön.

In the town of Hammerdal, a number of residents were forced to row their way home on Friday after water levels rose by half a metre in a short period. But rescue workers said the situation in Strömsund municipality had now stabilized.

”It’s relatively calm. There are helicopters inspecting the area at the moment. According to SMHI, the highest point has now been reached,” said local rescue chief Morgan Olsson.

A number of boat houses, summer houses and other small buildings remain under water, however, with the floods expected to stay at the same level for another day, said Olsson.

While Jämtland is currently the county most at risk, SMHI has also issued warnings for other parts of the Norrland region (see link below for the latest information). But the agency added that the area covered by flood waters had now begun to diminish.