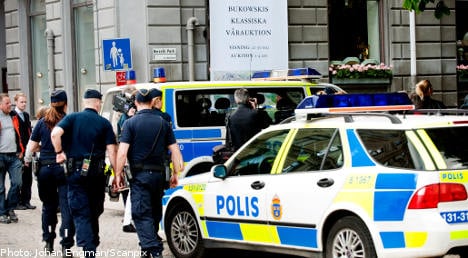 Stockholm police confirmed that no one had been hurt in the attack which occurred while Bukowski’s was holding viewings for its upcoming spring auction.

“Three armed men go into the auction house with firearms. They come out after a short while and run into a parked car and flee in it. When we come into contact with the staff, we are informed that no one has been physically harmed,” said Bjorn Engstrom at the Stockholm police.

Bukowski’s is currently holding its showings before its classic spring auction which will run from June 1st-4th. Among the items of jewellery set to go under the hammer on June 2nd are several expensive items, all with reserve prices in excess of 70,000 kronor.

The police located the getaway car on Klara Östra Kyrkogatan, just a few blocks from Arsenalsgatan, and are currently searching for witnesses to determine how the men continued their journey from there.

Among the precious items include a ring with an emerald-cut 5.29 carat diamond, as well as two diamonds set in white gold with a reserve price of between 750,000-800,000 kronor, in a total haul reported to be worth around 12 million kronor.

“A showing was being conducted when the robbery occurred. They took jewellery with a reserve price of 12 million kronor,” said Charlotte Bergstrom, CIO at Bukowski’s, to the Aftonbladet daily.

An emergency services physician is currently stationed outside the auction house and he has been able to speak to staff members and ascertain that no physical injuries were sustained in the attack.

“But many are upset and shocked. They tell some varying stories that are not always consistent, this is probably due to the shock,” the physician told the TT news agency reported at the scene.

Around 20 people were present in the show room at the time including staff members and visitors.

Under the conditions of sale, detailed in the Bukowski catalogue, all submitted items are insured to a maximum value corresponding to the reserve price. 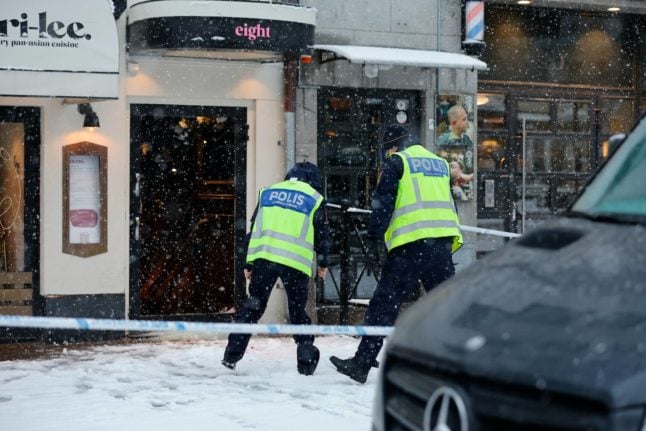 A glass door was damaged, spreading glass splinters, police press spokesperson Fredrik Svedemyr told TT newswire.  “Other than that, I haven’t received any information that there has been any worse damage,” he said.

Sweden’s gang criminals have in recent years been using explosives stolen from building sites or purchased illegally, and sometimes hand grenades, to target and send signals to rival groups.

This has led to a spate of explosions in the stairwells of blocks of flats, in restaurants, and sometimes in corner shops.

But these attacks tend to take place in the troubled suburbs of major cities and it is very rare for an explosion to happen in the city centre.

At the end of January an explosion rocked a restaurant in Södermalm in central Stockholm, leading to shocked headlines in the country.

No one was injured in the Gothenburg blast, which occurred around 4 o’clock on Friday morning. It is not yet clear what caused it. Technicians are currently carrying out a forensic analysis of the scene, Svedemyr said.

The police bomb squad was called after the alarm was raised, with tram traffic in the area paused in the early morning.

Police are now working to establish why the affected nightclub may have been a target.