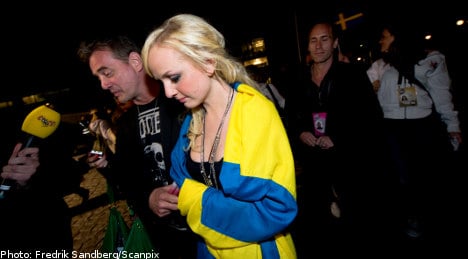 Anna Bergendahl’s stirring ballad “This is My Life” proved to lack sufficient appeal to the musical tastes of European voters and the young singer was left ruing what might have been after a dramatic evening in Oslo, this year’s host for the annual festival of song.

19-year-old Bergendahl thus made history in becoming the first Swedish singer and act to not qualify for the final since the introduction of the semifinals in 2004 and the first time Sweden has not featured since 1976.

There appeared little wrong with Bergendahl’s performance of her song, displaying assurance beyond her years. But the competition from Europe’s songsters proved too tough and she was left out of the ten final places allocated on the night.

There were few other surprises in those chosen with Israel, Turkey, Cyprus, Ireland, Georgia, Ukraine, Romania, Armenia, Denmark and Azerbajdzjan’s Safura, with a song written by three Swedes, all going through to make up the final 25 competing for the prestigious crown.

The Eurovision Song Contest is a popular event in Sweden with television audiences often approaching half the nine million-strong population. Saturday’s Oslo final will have no Swedish entry, but who knows, perhaps Azerbajdzjan can expect a little unexpected help from this far-flung corner of northern Europe.