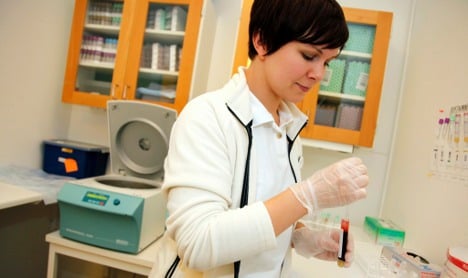 Hundreds of thousands of Swedes will be approached this autumn by the mammoth LifeGene project and asked if they wish to participate in Sweden’s largest ever health-related population study.

Leading medical university Karolinska Institutet will host the project, which has secured the approval of the national Ethics Review Board.

Participants will donate blood and urine samples, which are to be frozen and stored in a gigantic underground facility at Karolinska Institutet in Solna, just north of Stockholm. People taking part in the project will also answer general question about their lives and habits as researchers seek to better understand the links between lifestyle, environment, genes, and disease.

LifeGene aims to build up a database of genetic material from half a million people aged 0 to 45. By following the development of participants’ health over a long period, LifeGene will allow researchers at home and abroad to explore the development of diseases such as cancer, diabetes, asthma, and heart illnesses.

All gene data collected for the project is to be coded, and LifeGene has pledged not to release any information that could lead to the identification of participants.

But Jan Wahlström, a professor of clinical genetics at Gothenburg University, has called for more debate on the potential ethical ramifications of the project. Speaking to Dagens Nyheter, he asked:

“Do we want our genes used in a study of markers showing when we’re going to die, for example? And can we be certain that information about the genes won’t fall into the wrong hands in the future?”

LifeGene’s operating manager Jens Mattsson countered that the risk of identification was “non-existent”.